Sometimes oral feedback is better than written feedback. Sometimes it's the other way around.

The point isn't just that these myths are wrong, though they are. It's that this talk of "best practices" (or "best activities") is such a limited and unhelpful way of talking about teaching.

In this post I'll argue that sooner isn't always better. Then, it's time to put these sorts of claims to rest. There's a better way to talk about teaching.

Point: When It Comes To Feedback, The Sooner The Better

"In most cases, the sooner I get feedback, the better." (Seven Keys To Effective Feedback)

"Of course, it's not always possible to provide students with feedback right on the spot, but sooner is definitely better than later." (5 Research-Based Tips For Providing Students With Meaningful Feedback)


A few weeks ago I gave a quiz to my geometry classes. We were at the end of a unit on quadrilateral properties and proofs, which was the area that my quiz targeted. 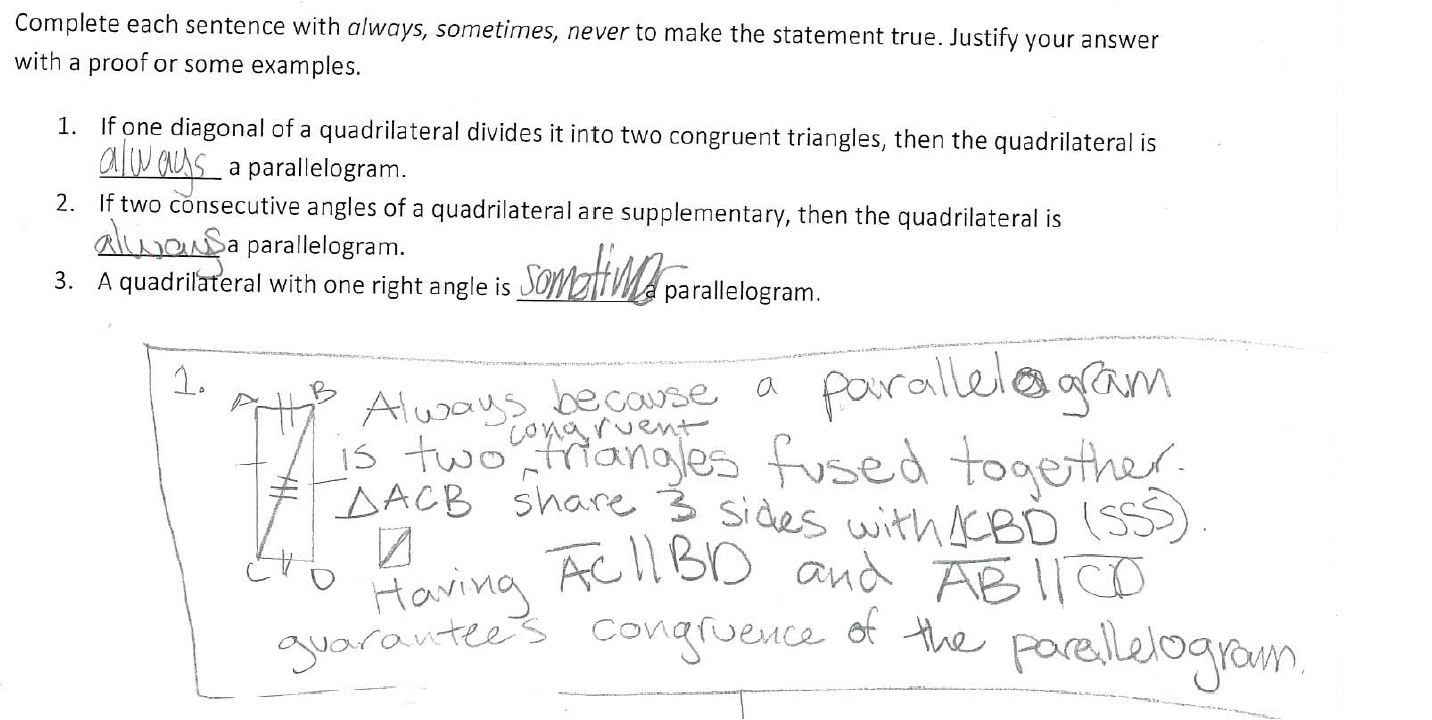 I quickly decided to give my class feedback and time to revise: no other activity that I could run in class would be able to address each individual mistake and give each student a chance to think about their specific area of need.

I decided to wait a week.

Why wait? It wasn't because I didn't have time. I think that waiting was the right decision. Consider the work of one of my students, Jake:

Jake showed some major limitations in his thinking on this quiz. Jake indicated that only parallelograms can be split along their diagonals to form two congruent triangles and that the consecutive angles of a parallelogram don't sum to 180 degrees.

Jake was hard-working during class, and he participated actively in many of our conversations in class about parallelograms. In short, he hadn't slacked during the past two weeks. Despite this, he was still having trouble putting the pieces together. Would feedback help him where two weeks of instruction couldn't?

Maybe. But here's another thing I knew: the upcoming week quite possibly would help. Why? The unit we were beginning was studying how one shape (e.g. a parallelogram) can be dissected and rearranged to form a new shape (e.g. a rectangle). The activities that I was planning on running would give us a chance to physically rearrange shapes into other shapes. I thought that these activities would probably give me a number of great opportunities to address some of Jake's misconceptions about congruent triangles in kites and parallelograms. Or, at least, we could draw on these dissection examples when discussing his quiz when I did give Jake feedback.

Another factor: Jake was hard-working, but I saw a drop in engagement after a few days of "always, sometimes, never"-style questions. I wasn't shocked. We had been working on them for a few days, and questions that are posed in a similar fashion can start to bleed together after some time. I thought that Jake (and others) needed a break from these sorts of questions.

So I waited a week, and I gave feedback. And it was fine.

OK, Great. Every Rule Has Exceptions. Including "The Sooner the Better." Who Cares?

Thanks for the question, sub-heading!

It's true: there are certainly times when the decision to wait a week to give feedback is the wrong one. And is that the majority of situations? The vast majority?

I don't know. I do know that there are lots of situations like my quadrilaterals quiz, and there are a lot of students like Jake. And that "the sooner the better!" is, strictly speaking, false.

Here's the only question worth asking, then: do we learn much from a slogan like "the sooner the better"?

I don't think so.

We don't need "5 Research-Proven Teaching Techniques" or "7 Activities For Learning" or "12 Qualities of Excellent Feedback." Ultimately, the work of teaching comes down to the decisions that we make, and writing about teaching should be about improving those decisions.

What we do need is to talk about the dilemmas that we teachers commonly face, and try to find guidelines that help us make wise decisions in those scenarios.

Talk of "the sooner the better" isn't anywhere close to that. In the rest of this series, I'll try to talk more productively about decisions we face when giving feedback for revision. The stories that I've shared so far are my attempt at a start to that work.

---
This is the fifth post in a series on feedback. To read the rest of the posts click here.
Posted by Michael Pershan at 8:39 PM