I read your previous post and was intrigued by your argument. I'm sympathetic to the idea that "giving feedback" is hopelessly vague. And, I agree: giving feedback is only sometimes effective.

You suggested that teachers need to take the energy they put into "giving feedback" and redirect it into "facilitating second drafts."

I'll grant that your post showed an example of "second drafting" that led to student learning. Sure. But who says that "improving the classwork" is ever the most effective activity to get to this learning? After all, the effectiveness of a teaching technique is at least partly determined by how much time it takes. Also: maybe you got lucky? Maybe asking students to improve their work wasn't the right decision to make, even if it happened to lead to learning.

In short, you've got more work to do.

I agree completely. Here’s what I’ll try do to address these concerns. First, I’ll argue that there are at least some situations when helping students improve their classwork is the right instructional decision. But it’s a long way from saying that “second drafting” sometimes works to saying that it works in most classrooms, in many situations. I won’t be able to bridge that gap entirely, but I'll try to get as close as I can.

To start, I want to tell you about an awesome student of mine, Toni.

Toni is a 9th Grader. She's new to our school, and she stood out early on. On the first day of class, I gave students a version of the handshake problem and put them in groups. Toni took a quick look at the problem and said, "Oh this is simple" to her groupmates. She took a marker and whiteboard and scribbled a few calcuations without a word of explanation to the folks she was working with. She quickly and accurately calculated how many handshakes we’d need to all shake hands (but didn’t try the second half of the problem in search of a generalization) and sat back and called me over.

It was only after I nudged them that Toni (and her group) really dug into the second problem. 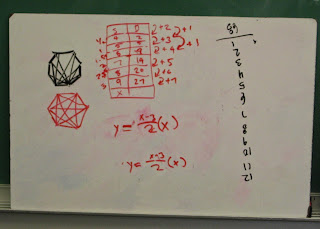 Toni has a group of friends in class that she gets along well with. One day I overheard them talking about how smart they were at math. Toni said, "Oh yeah I'm really good at math. It's in my blood." Being good at math is clearly an important part of Toni's identity. She sees smartness in math as something pre-determined and relatively fixed.

Another thing about Toni: she often didn’t justify her work, even when the assignment explicitly called for justification. In her classwork or quizzes, Toni would quickly come to conclusions that were poorly justified. Often (usually) they were dead-on. But sometimes they weren’t. For instance, for several days Toni was absolutely sure that she had found a counter-example to SAS. 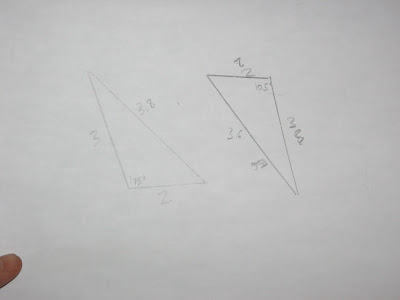 I tried to give Toni some one-on-one feedback on her SAS counter-example during classwork. It was hard going. She didn’t seem interested in what I had to say, was easily distracted. I tried to get her to use reasoning to check her conclusion, but her confidence seemed absolute.

This pattern continued over the course of a few weeks. Toni would produce work quickly and without proof, even though we talked about and shared proofs explicitly during our class discussions.

This came to a head on a classwork assignment about trapezoid properties. My major goal for the lesson was to help students understand how to use parallel lines and triangles to write proofs about quadrilaterals. I gave students a problem set including the question, “Is it always, sometimes or never true that the sum of the angles of a trapezoid is 360 degrees?”

I came over to Toni and saw that she had written “always” by it. I nudged her to offer an argument, and she wrote “Because all quadrilaterals sum up to 360 degrees.” I asked her how we knew that, and she wrote “y=180(n-2)” on her page. Eventually, with a bit more nudging, she wrote "alternate interior angles are supplementary."

During my initial instruction I had suggested that students try to use parallel lines and alternate interior angles and the decomposition into triangles to develop these trapezoid proofs. The day before, we had worked on a proof that triangle angles sum to 180, and a student had shared a proof using parallel lines. I tried to use questioning to push Toni in this direction, but even as were talking she was looking at other problems and patiently waiting for me to leave her alone.

In other words, my initial instruction failed.

Now, Skeptic, how would you have me react to this failure of initial instruction?
I decided that the only course of action that had a chance of working was giving feedback to the whole-class and asking the entire class to improve their earlier work. This way, Toni wouldn’t be able to escape from the connection between my instruction and her own work. She wouldn’t have any other mathematical distractions -- any other problems for her to show her ability on by rushing on to them during instruction. Most importantly, since the entire class would be improving their work, she wouldn't feel as if her struggles were on display for others. Toni could have a chance to quietly make improvements without losing status in the eyes of friends.

Here's how I did it: I handed everyone’s papers back with no comments, to minimize everyone's ego-involvement. Then I posted on the board: “Is it always, sometimes, or never true that a kite can be divided into two congruent triangles?”

After discussing the problem and sharing proofs verbally, I told the class that I had read and enjoyed their work from yesterday, but had noticed that lots of them had room to improve their proofs. I said that proof-writing is new to a lot of us, and is a different skill than answer-getting in geometry. We can get better at both, I argued. (At this, Toni groaned.)

Then I shared three “sample” responses to the kite problem:

Not a proof. No reasons given

OK proof. Reasons given, but they're private reasons 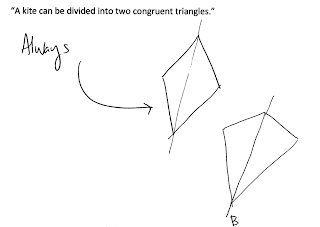 Great proof. Reasons given that others can understand. 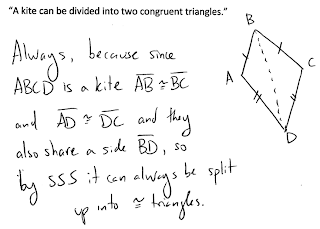 After giving this feedback, I said: "Pick one of your problems from yesterday, and write a nice, improved proof, like this third proof, on a new piece of paper."

OK hold on a sec. This is Skeptic again, and I know where this is going. "And after this, the look of understanding! a smile blooms on Toni's face! She laughs and says, 'Mr. Pershan, I didn't realize that I can do this!'"

Right. And from that day on, Toni's proofs were much improved, and her attitude in class was better, and then five years later she calls to tell you how important your class was to her.

Pardon me, but I'm skeptical. I don't know Toni. No one knows Toni. You know Toni, and for all we know you're making this up.

You expect us to believe your "second drafts" idea based on your totally unverifiable story?

I don't expect anyone to believe me based on my word. You shouldn't. I'm probably not making this up, but I'm also not an objective observer of my own classroom. Further, I can't be sure that what I think caused Toni to improve actually caused her improvement.

Instead, inspect my thinking. I'm not claiming that asking Toni to improve her work caused her to learn how to write a proof. I'm claiming that this was the only sensible teaching decision to make in this situation. Is there a flaw in my instructional reasoning? Is there an alternative to classwork-improvement that I didn't consider? Do you think that one of the solutions I dismissed could have helped?

If my reasoning is sound, then the first half of my response to a skeptic (and Skeptic) goes like this: this is a type of situation where asking students to improve their work is the best teaching decision. When a student's struggles aren't even on his own radar, asking for a second-draft is often going to be the best course of action, in particular when that student is disposed not to see their own areas of improvement.

But the skeptic's gap remains: how do we know that asking for a second draft is a generally useful teaching move, and not just helpful in the specific scenario that I outlined above?

The best I can personally do is share my hunches and speculations. But that's another post for another day.

I love your comments, and I have a special love for your skeptical comments. Here are some questions I'm thinking about after writing this post.
Appendix

As it happens, Toni's proofs have been much better.

And for those playing at home, cross off "whole-class," "verbal" and "goal-setting" on your feedback Bingo card.

This is the third post in a series on feedback. To read the rest of the posts click here.
Posted by Michael Pershan at 8:43 PM