A Time When I Directly Told 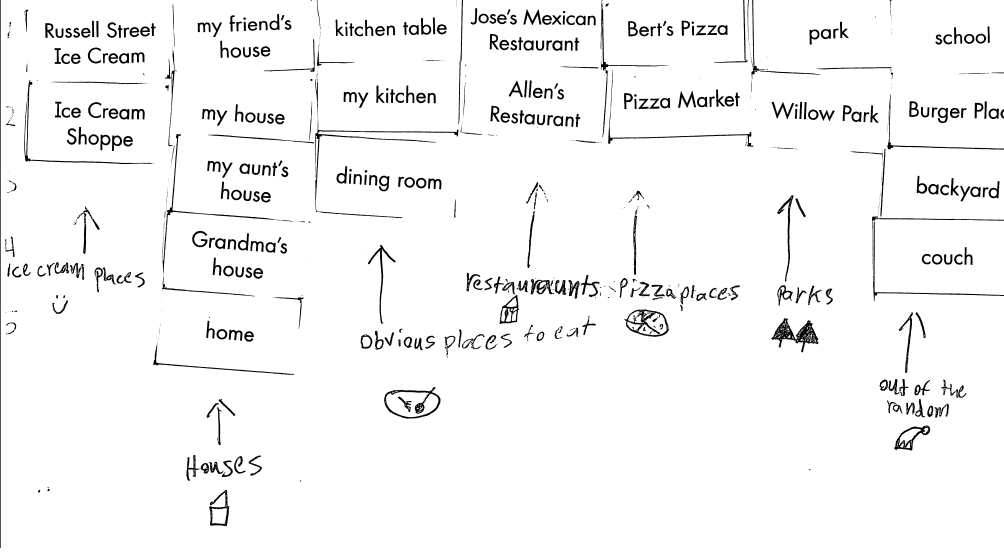 We’re studying data in my third grade class. My students as a whole came in with vague notions of the meaning of data (“it’s information”) and some kids were confused as to what this all has to do with math anyway. On an initial dataset, kids mostly categorized things by their superficial features (“restaurants go together”) instead of grouping data more purposely in order to answer particular questions. Their descriptive language was mostly limited to “most” and “least”, and the questions they posed reflected that.

* (The full lesson plan is here, at the bottom of the piece.)

Anyway, a pair of kids were organizing the class’ data on “Places where we like to read.” This was the data set they were organizing:
When I came over, they had organized all the data points into two categories. They had the data on little cards, and these were their groupings:

I asked the pair, “What are your categories?”

“This one [on the left] are places for education.”

I was excited by this, because up until this point it had been very difficult for the students to see any other possible organizations of the data that didn’t just categorize their surface features. Actually, this was their second attempt at organizing the dataset, and their first had been fairly typical: all the “home” was grouped together, all the “bed”s were grouped together, “school” was alone, “library”s were together, etc.

In other words, I thought that I was watching a moment of learning, where the kids saw what we mean by organizing data to answer different questions.

So, I continued probing: “Got it. And what’s the other category?” I pointed to the right grouping.

Student A: “This cateogry is in my room, in bed, and also in the living room...”

Student B: “In home, a bunch are in home...”
The kids continued to trip over each other in an attempt to fully characterize their second category. I saw this as evidence that they recognized the insufficiency of their categorization, but lacked the language to properly describe it.

This, I recognized, was a perfect opportunity to tell them something.

I said: “Oh, so this category on the left are the places where education happens. And this, on the right, these are not places of education.”

The kids nodded. One of them repeated the categories using this new language, and then later used it when I brought the class over to look at the categorization that this pair had made.

How To Not Quit Teaching

Thinking of leaving teaching? Here are some posts to get you started:

Read them all, and you'll find yourself with many arguments for leaving classroom teaching. But what if you want to settle your doubts and stay? What's helpful for getting past this sort of angst, besides leaving?

These days, I'm feeling pretty good about classroom teaching as a long-term gig. Personally, I found it helpful to interrogate some of the assumptions behind my earlier angst about teaching. Here are a few disorganized, stray thoughts that came out of my reflection:
I propose that, from the standpoint of current classroom teachers, it's more productive to think of how to guide one's own learning than to worry about the state of the profession.*

* This isn't to say that it's illegitimate to worry about the state of the profession. Activism is cool. So is being informed. All I'm saying is that "OMG THE SKY IS FALLING AND TEACHING HAS NEVER BEEN WORSE" isn't a particularly helpful perspective for me to dwell on, because I have/want to be a classroom teacher.

Mostly for me, but feel free to jump in.
Posted by Michael Pershan at 3:53 PM 22 comments:

Thinking Through a Decision: Tom and Addition

The Class, The Kid, The Activity:

I'm going to share with you a situation from my 3rd Grade class and a decision that I made. Then, I'm going to ask you what you'd do in this situation.

I'll attempt to provide context at three levels: about the class that I'm teaching, about the kid that I want to focus on, and about his work on a particular activity.*

* I'm unsure how important school context is to this. Briefly: I currently teach at Saint Ann's School, a private school with competitive admissions in New York City.

We've been studying addition for the first five weeks of school as part of our first major unit. (I have lots and lots of curricular freedom, but I've elected to mostly use the TERC Investigations activities so far.)

Here's a sample of some of the work that we've been doing in class over the past few weeks. 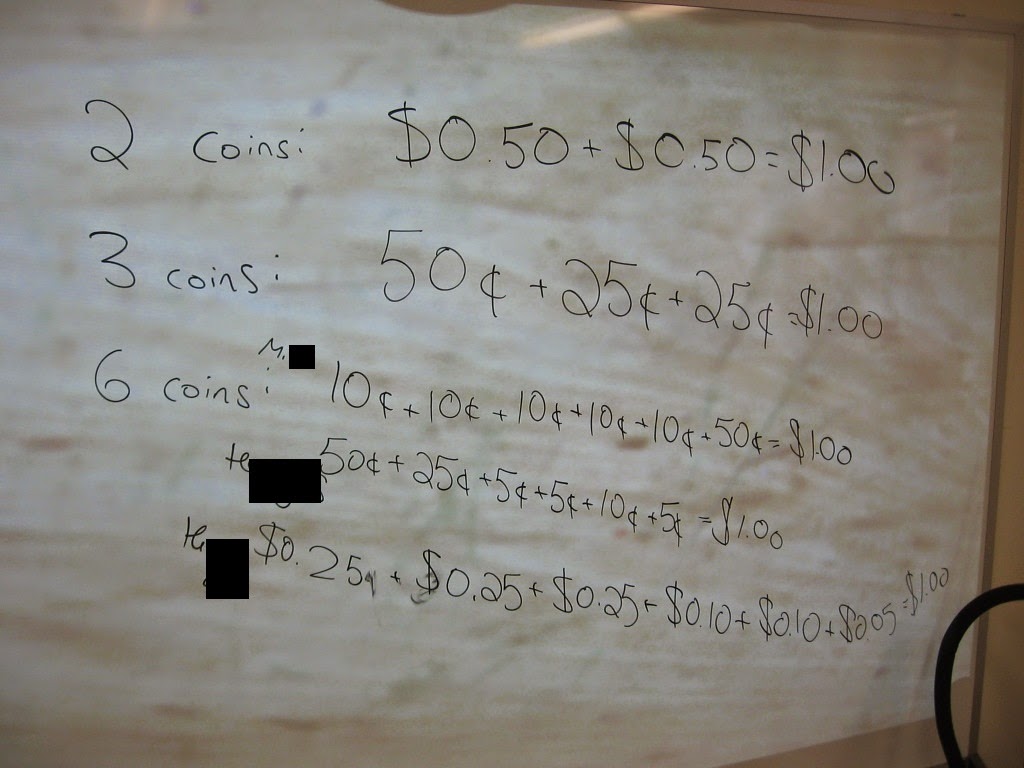 In addition to our main activities, we've often been starting our sessions with number talks aimed at helping students build a greater facility with efficient mental addition.

Tom is a 3rd Grader. (Tom is not his real name, but privacy etc.) Tom has worked slower than other students in class on most problems that we've done this year. I randomly call on students fairly often, and when Tom's name gets picked he often struggles to articulate a line of reasoning. 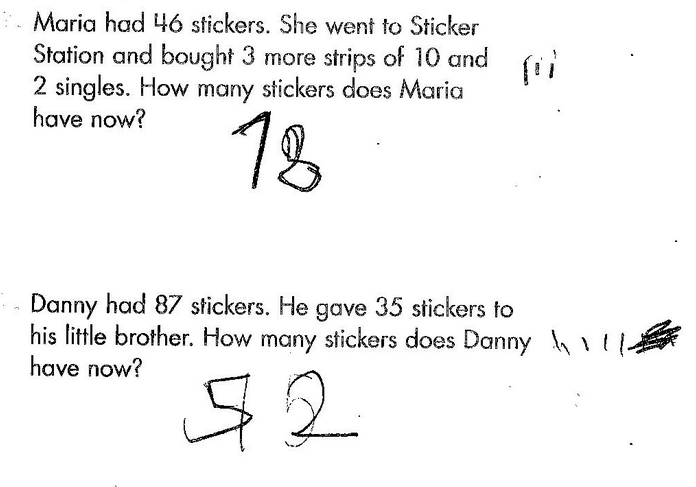 Tom has had moments of great thoughtfulness over the first few weeks of school, and it's been fun to watch him make progress. In sharing his reasoning he sometimes makes mistakes ("65 cents and 25 cents makes a dollar") but when given a chance to slowly think it through he's able to improve his thinking ("No that can't be right because 65 and 20 make 85 and 85 and 5 make 10...")

In short: Tom uses a variety of strategies quite well, but his addition is inefficient and error-prone.

The Activity: Formative Assessment for Addition

After a few days of some rich and interesting number talks, I wanted to know what addition facts my students still struggled with so that I could properly steer things in the next week. I knew that a few of my kids, including Tom, still struggled with mental addition, but I didn't have a good understanding of the types of problems that they struggled with. To assess which addition facts my kids "just knew" and which they had to figure out, and also whether they could figure them out, I decided to give my class 33 addition questions and ask them to work on them alone.

Knowing that these sorts of activities sometimes cause anxiety in students, I was careful in how I framed the activity for kids. I didn't tell them that the activity was timed. I took care to make sure that there was another activity ready for students who chose to move quickly that they could silently access. I also made it clear that I expected there to be questions that they didn't "just know."

Here's a video of how I introduced the activity.

Here's Tom's work on this activity. 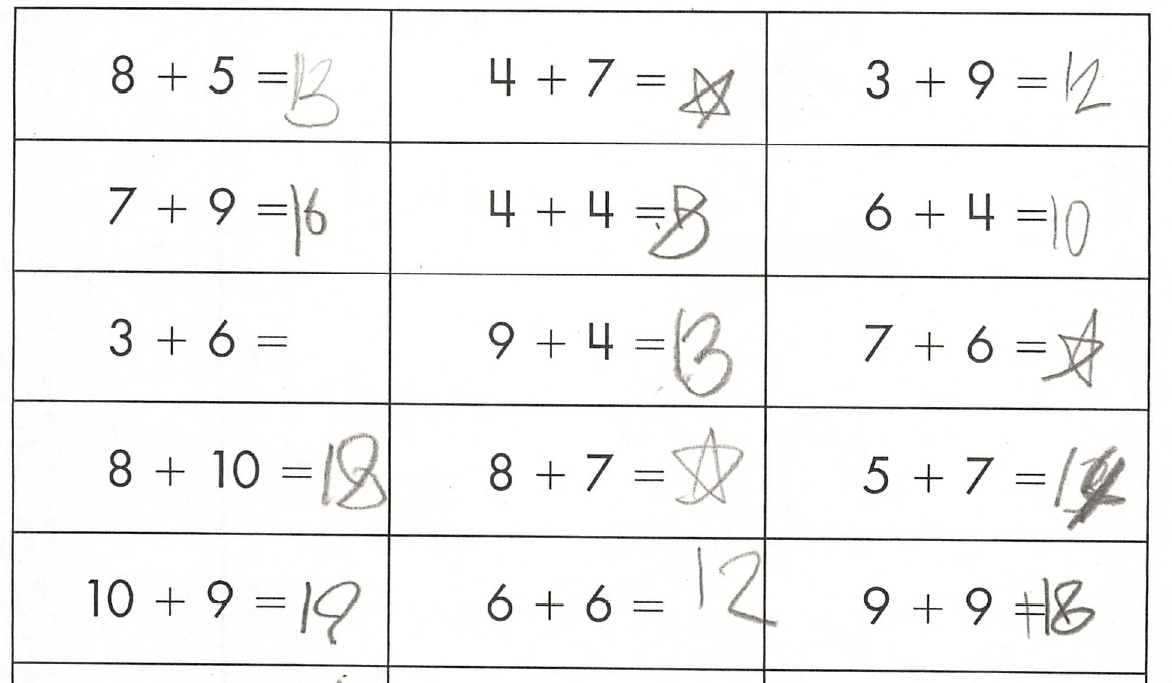 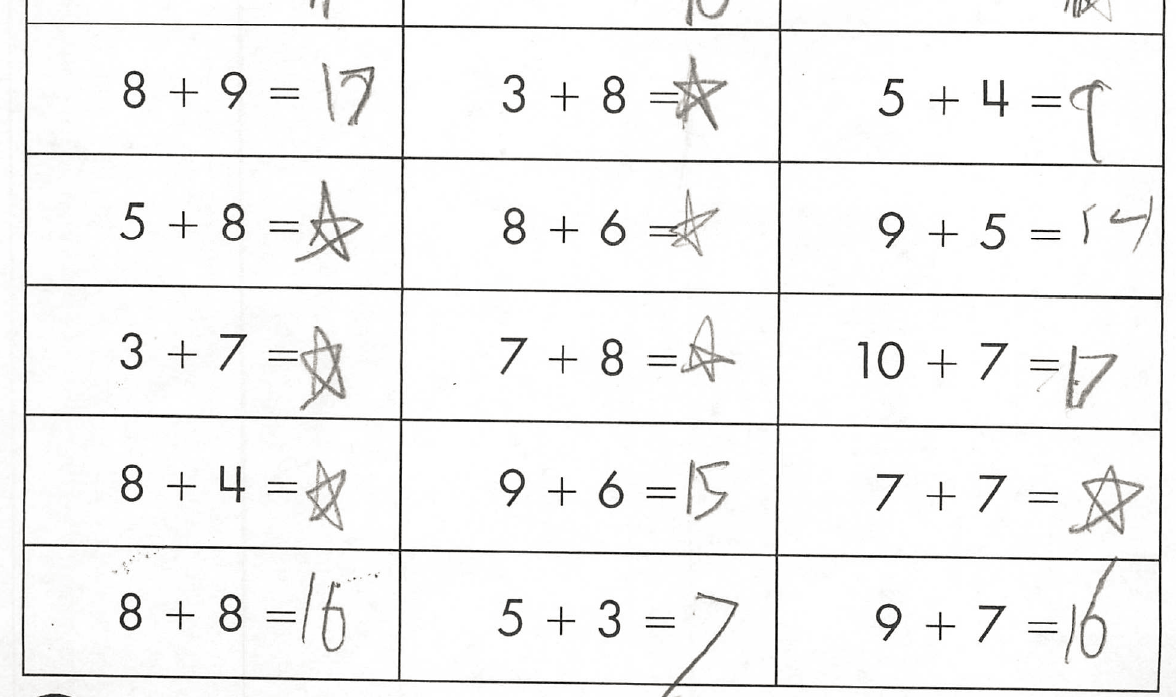 (About the stars: instructions to the class were to "start with the ones that you 'just know' and put a star next to any that you need to think more carefully about, and then work on those. By the time I noticed that Tom wasn't returning to the ones he skipped, I decided that this would be helpful information anyway and there was no need to have him work on these problems. That might have been a mistake.)

I noticed that Tom has very little problem with adding 9's. Knowing his sometimes-facility with certain addition strategies (and his lack of quick recall of addition facts in general) I think that Tom is reasoning relationally here, e.g. 9 + 7 = 10 + 7 - 1. This is nice.

I noticed that Tom skipped lots of questions that involve adding 8 or 7. I noticed that he didn't "just know" 3 + 7, which might have been a useful fact for figuring out 7 + 6 or a lot of the other 7's. 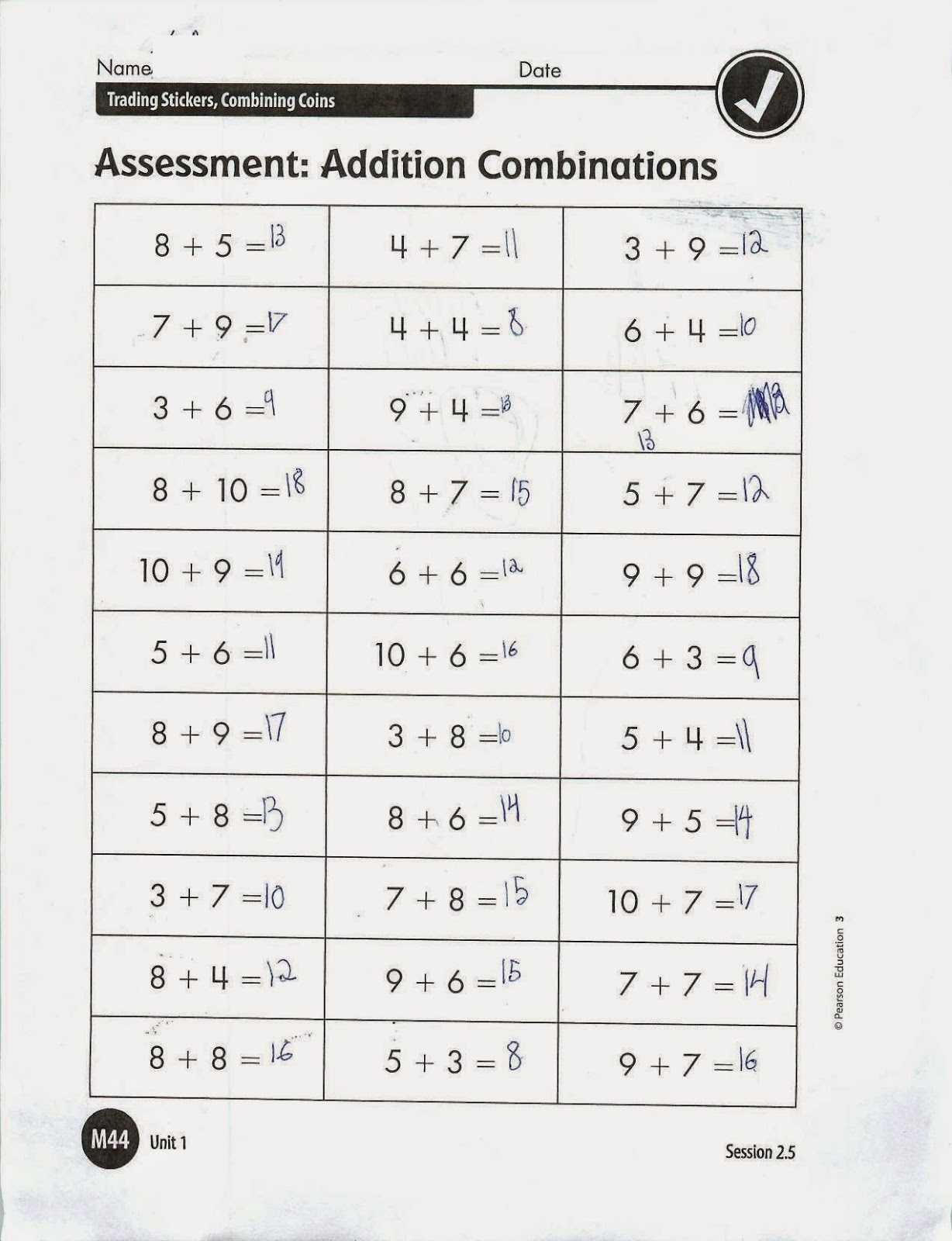 The Question and a Decision:

I've had students like Tom in every class I've ever taught. How do I help Tom while still pushing the rest of the class forward?

After thinking things through, here's what I decided:
I'll want to check back in a few weeks to see what sort of progress Tom (and others) have made.

In Conclusion:
Posted by Michael Pershan at 10:25 PM 10 comments: