The Last Post I'll Write On SBG and Feedback, Probably 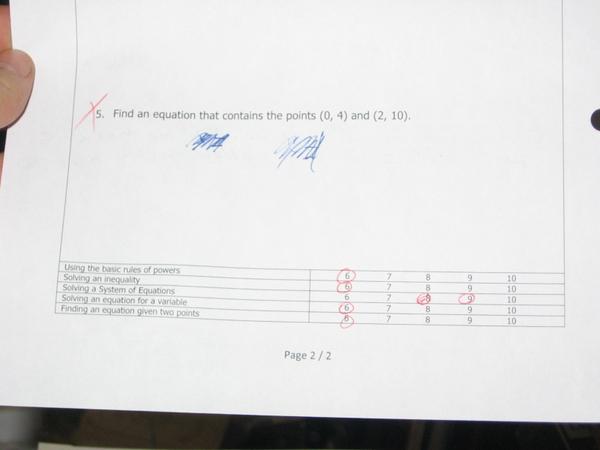 That picture makes me a little icky inside. As of two years ago, this was the feedback that I was giving my kids. They had weekly quizzes, and I was using Standards-Based Grading for reassessments and all that jazz. They were finishing their quizzes and then marking up their own quizzes against an answer key. Then I would go through it again and mark up their rubric levels for each skill at the bottom of their quiz.

This was not good feedback. Good feedback would have involved giving each kid some way to improve or advance their work on the quiz.

Further, even if I had been giving good feedback in addition to these SBG scores at the bottom of the quiz, it probably would have been a waste. Kids would likely just skip over my comments and go straight to the SBG scores on the back.

SBG might be great for all sorts of reasons, but the way I was doing it didn't really allow for much in the way of good feedback. I don't want to tell you that you shouldn't do SBG, but I don't think that we should compromise on feedback. Unlike what some people will tell you, SBG is not good feedback.

(This ends a series of posts starting back in January 2012.)
Posted by Michael Pershan at 9:52 AM