Under The Influence Of A Theory I've Never Known 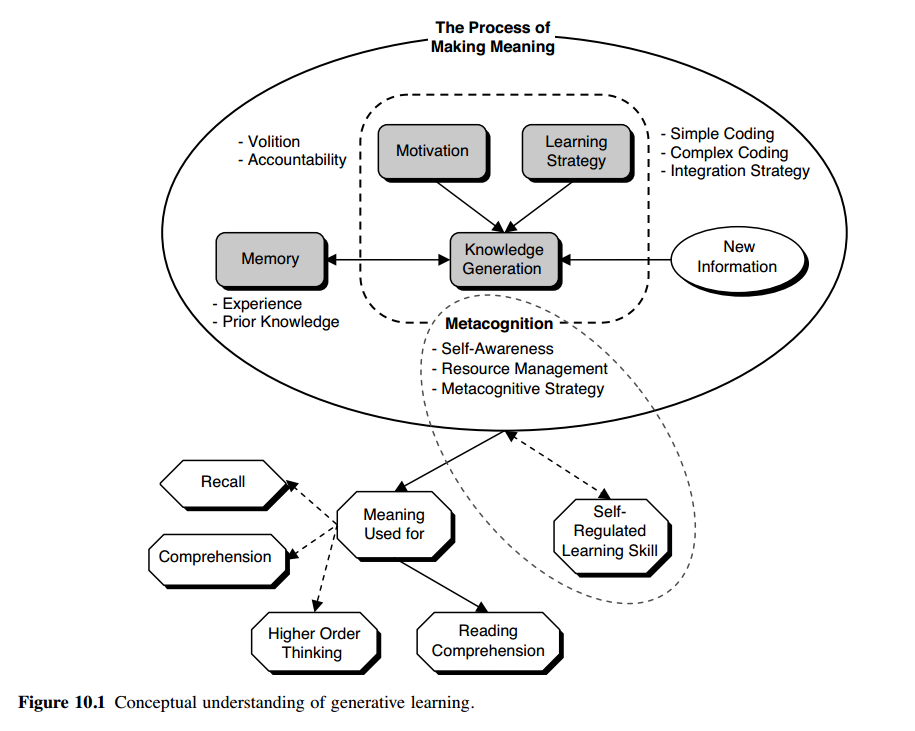 By all accounts, Merlin Wittrock was a highly influential educational researcher. He was highly cited. His generative theory of learning was the sort of thing that his colleagues called revolutionary. When he died people wrote articles like "M.C. Wittrock: A Giant of Educational Psychology." And on top of all that, Professor Wittrock had a bad-ass wizard name. Suffice to say, he was a big deal in educational psychology.

He was best known for his generative theory of learning. In short, Wittrock's theory states that deep learning has to do with the strength of the relationships between pieces of information instead of their mere storage. But as you can see from the fairly baroque diagram at the top of this post, that's a significant over-simplification.

If you know nothing about education, then you might think that the acclaim for Wittrock's theory was enough for his ideas to spread through teaching. You might imagine all three-and-a-half million of us teachers hanging out by the cafeteria and just shooting the breeze about Wittrock's theory and how it's changing how we teach fractions or something. I'd be all like "Hey guys so 'Problem-Solving Transfer' is the obvious choice, but I'd have to say my favorite Wittrock piece is 'The Cognitive Movement in Instruction'" and then we'd all argue boisterously but with obvious mutual professional admiration.

Anyway, that's not what happened:

"Generative learning never took root beyond the confines of its academic subfield, and certainly not in K-12 classrooms." (Schneider, 164)

In Chapter Five of From the Ivory Tower to the Schoolhouse, Schneider is interested in contrasting research that made it with research that didn't. You think that Gardner's Multiple Intelligences was destined for greatness? Check that against Steinberg's similar Triarchic Theory of Intelligence. So Bloom's Taxonomy was a winner, but what about Bloom's Second Taxonomy? Why didn't that stick?

Unlike research ideas that successfully made their way into the awareness of educators, Wittrock's theory umm fell like a rock. And it wasn't like he wasn't trying! He was leading professional development sessions for teachers. He tried to write articles distilling his work for practitioners. He spoke publicly and often.


Schneider sees Wittrock's theory as a failed bit of research. It penetrated educational psychology, but not teaching. And, indeed, I'd never heard of him or his theory until reading Schneider's book.

But here's what I can't shake: I had heard of ideas like his. Further, they challenged and provoked me. When I came into teaching I definitely saw understanding as a matter of information storage. I thought that I could teach skills by some sort of repetition, making sure that the explanations reached ever increasing circles of students. Somewhere along the line I ended up thinking that what matters more is the network of learning, the strength of the connections and the way new information can be invited into that intricate web.

This doesn't contradict Schneider's point, but it does challenge his emphasis. Throughout his book, Schneider has been judging research against its widespread recognition and popularity. The theory goes like this: in order to become wildly popular a piece of research can't be too challenging, difficult or complex. Of course, this means that its fidelity will be up for grabs, but the exposure will inevitably send some educators back to the research to engage with the ideas more seriously.

But how many educators, in Schneider's vision, will end up engaging constructively with the research? How many will end up adopting the research in speech only, without really changing anything that they do?

Those are questions that are incredibly difficult to answer. But here are some more tough questions: Is there a path from Merlin Wittrock's writing to my understanding of learning? How many teachers were guided by Wittrock without knowing his name? How do we know that it's fewer than those that actually did something valuable with Bloom's Taxonomy?

Still: it's easy to imagine a world where Wittrock was a more successful advocate for his ideas, and it's hard to imagine that world as a worse place than ours. Raymond: after five chapters and lots of hemming and hawing, I'm more or less convinced. What say you?

Raymond Johnson and I are reading Jack Schneider's new book, "From the Ivory Tower to the Schoolhouse: How Scholarship Becomes Common Knowledge in Education." This was Chapter Five, and Raymond will soon respond. Previously: