The Hexagon of Proof 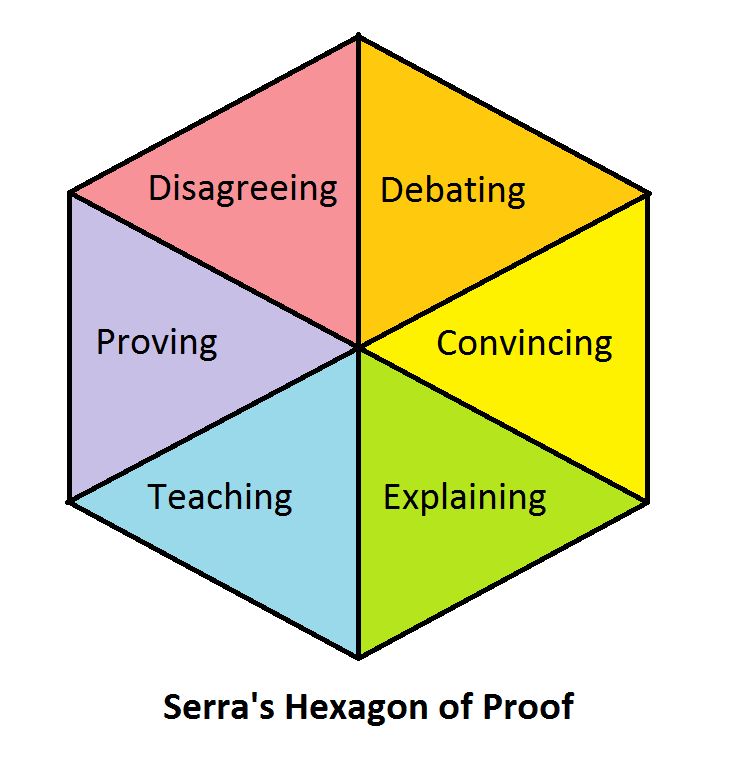 Following up on the work of Serra and De Villiers, and in the spirit of recent discussions about the success Bloom's Taxonomy has had in penetrating classrooms, I present the Hexagon of Proof.

There are six components to the Hexagon of Proof. Learning is a messy affair that doesn't follow any sort of strict hierarchy, so a math classroom should involve all six of these aspects of proof. Still, if teachers find that their students are having trouble proving things in some area in math, students may benefit from time spent disagreeing over or debating some related mathematical propositions.

The idea is that the reasons that are needed for proof can be developed through a variety of contexts that kids are more familiar with, such as arguing with each other over something controversial. Once a reason have been exposed, though, the reason can have a life of its own in a proof.

Disagreeing - Hook the kids into a disagreement. "Draw two triangles. Measure their angles. Do you think that all triangles have that many degrees?"

Debating - In the face of disagreement, ask kids to defend their views. "Some folks here aren't sure that all triangles will have 180 degrees. Why do you think they do?"

Convincing - Give kids a chance to win over their peers. "And what do you respond to your skeptics?"

Explaining - In the face of agreement, explain why something is true. "So, why do all triangles have 180 degrees?"

Teaching - Explain something whose explanation you don't yourself require. This might involve pretending, as in "We know that all triangles have 180 degrees. How could we teach this to a 4th grader who doesn't know this?"

Proving - Use the traditional language and structure of mathematics to prove that something is true, whether or not its controversial or needs explanation. "Prove that all triangles have 180 degrees."
Posted by Michael Pershan at 3:28 PM

Email ThisBlogThis!Share to TwitterShare to FacebookShare to Pinterest
Labels: Geometry