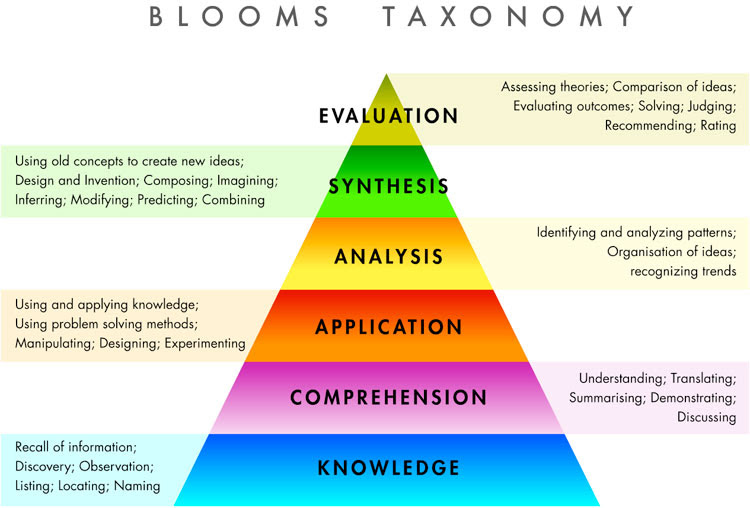 Other aspects of [Bloom's Taxonomy's] pragmatic appeal, and particularly the ease of appearing to adopt it without changing practice, were less intentional.

The taxonomy gained traction in K-12 classrooms because teachers were repeatedly exposed to it, because they believed it made sense with regard to how it addressed issues of student ability, and because they saw it as relatively straightforward to implement.

Jack Schneider is worried about educational research. He knows why most educational research has no impact on teachers and teaching -- most researchers aren't writing for impacting teaching anyway -- but he wants to understand why, sometimes, research does infiltrate the classroom. In the opening chapter of From The Ivory Tower to the Schoolhouse he looks at Bloom's Taxonomy as an instance when, against the odds, a piece of university research did become widely known among teachers.

In Schneider's analysis, part of what made Bloom's Taxonomy so attractive to teachers was that they saw it as just reaffirming what they were already doing. "Teachers could continue what they had always done, making minor adjustments to the taxonomy, their practice, or both," he writes. This was a crucial aspect of its popularity.

So Bloom's Taxonomy was a hit, a blockbuster. But at what cost? In the spirit of "Bloom's Taxonomy" or "Gardner's Multiple Intelligences" (the subject of his next chapter), let's enshrine this as "Schneider's Dilemma."


Schneider's Dilemma: A piece of research will only became widely adopted by teachers if it is seen as reaffirming their existing practice. But if a piece of research already fits in with teachers and educators' existing beliefs, then how can it improve practice?

Schneider -- clear-eyed and erudite -- sees this possibility, and doesn't see it as majorly problematic. Of course, Bloom's Taxonomy meant many different things to many different educators, and he even anticipates critics who would suggest that "the taxonomy has reinforced the status quo in schools." Despite this, he thinks that Bloom's Taxonomy is a true success story:


Yet whatever the challenges and unintended consequences, the taxonomy has stimulated thought and discussion among teachers over the course of many decades -- a rarity for a piece of educational research. It has given teachers a common vocabulary for talking about educational objectives, served as a framework for considering the arc of student development, changed the way that many teachers think about lesson design, and oriented many teachers away from rote memorization and toward the development of thought.

Maybe. I wish that Schneider had worked harder to make the case of the taxonomy's real impact on the profession. What's the path from a universally-compatible taxonomy to making meaningful change? How did the taxonomy effect teachers' practice if it was adopted precisely because it was seen as fitting with practically all existing teaching philosophies?

I can speculate here. Maybe Schneider thinks that the taxonomy was sort of a subterfuge (a virus?), secretly and subtly altering teacher's worldviews over the years. Or maybe, once it was entrenched in teacher's vocabularies, its meaning could be refined over time, so that the particular advantage of the taxonomy is that it gives teachers a manageable, bite-sized concept to focus on.

Or maybe "blockbusters" don't really lead to much change to the instructional core of teaching. Maybe progress comes through other avenues, and widely popular research will inevitably face some version of Schneider's Dilemma, defanging it on its path to glory.

Raymond Johnson and I are reading Jack Schneider's new book, "From the Ivory Tower to the Schoolhouse: How Scholarship Becomes Common Knowledge in Education." We'll each be writing posts on each chapter. This was Chapter One.
Posted by Michael Pershan at 2:50 PM