I've included a lot of obscenities in this post, because that's how it happened.

The subway doors opened at 42nd Street and in walks this guy with a Department of Environmental Conservation t-shirt and lots of chains, lots of keys rattling around his pants. I'm sitting, he ends up standing right in front of me, but only for a second. He takes a look down at me and starts pushing people out of his way.

At this point I'm thinking, hey, that right there is some extra-ordinarily polite Jew hating.

Our t-shirt man clarifies: "I hate Jews. They fucking crucified God. Christ killers! Christ killers, I do not stand next to a Jew. No. Fuck you, fuck Jews. Heil Hitler! See you in Heaven, yeah, fuck you Jew. See you in Hell. I'll stick a cross up your ass. You're not a minority, you're the majority."

I mean dude's pointing at me while he's shouting at me from half-way across the car. I start chuckling which in retrospect isn't the best way to assure that crosses and my ass keep their distance.

When I changed jobs this school year I also changed commutes. I went from walking to work through the lovely Jewish/Dominican ghettos in which I reside to riding the subway for an hour everyday. And by my count this is like the fourth, or maybe fifth time that something like this has happened on the subway this year. There was the guy who threw a penny at me. There was that guy who just started yelling "Shalom" at me. And the lady who screamed "HE'S A JEW! HE'S A JEW! HE'S GOING TO KILL YOU!" while I was riding the C. (I was not.)

You might be thinking, hey, I didn't know that anti-Semitism is a problem in America. There's a good reason why this sort of thing isn't on your radar: it's really, really great to be a Jew in America. 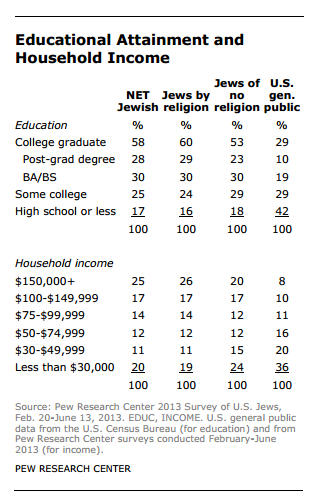 Being a Jew in this country is a remarkably sweet deal, basically because we get to be well-educated white people. We weren't white when we got here, of course. It took a while to get things going, a story you can read about in "How Did Jews Become White Folks?"

As with most chicken-and-egg problems, it is hard to know which came first. Did Jews and other Euro-ethnics become white because they became middle-class? That is, did money whiten? Or did being incorporated into an expanded version of whiteness open up the economic doors to middle-class status? Clearly, both tendencies were at work.

These days, in this country, Jew is just another sort of white, and anti-Semitism has receded because you don't mess with white folks. After crazy dude got off the subway the lady sitting next to me reassured me that the guy was just some whack-job. But what makes him crazy, instead of hateful, evil? What makes him nuts is going after me, an upstanding member of the dominant class.

Jews are safe, rich even. Anti-Semitism is not part of the regular life of a Jew in this country, you don't have to gird yourself against it the way you do if you're black or brown...

...unless you go around wearing a yarmulke. Because then? Then all the whack-jobs come out. People stop you in the streets start telling you about their churches. They shout at you, threaten you bodily. They call you names, and who cares if they're crazy because crazy stabs just the same.

I mention all of this not to reinforce the notion of Jews as victims, because we're not worth your concern in America.* But I hope I'm not flattering myself in thinking that my experiences are instructive. I mean, for one you've got the sheer power of whiteness to admire. There are Jews walking around New York really everywhere, and they basically experience none of this stuff because they don't wear a yarmulke and can just slip in and disappear from view. There's all this hate out there for Jewish folks, but whiteness guards you against it in this country pretty much all the time. That's potent stuff.

* OK, one quick plug for anti-Semitism. Jews were knocked around Europe for a couple millenia, and the Holocaust was like a year ago. You think it just went away? Come on.

But the yarmulke reveals all truths, and it's a reminder that hate or prejudice doesn't have to be visible to exist. Check out Bonilla-Silva who showed that white students know how to express racially appropriate opinions on surveys, but revealed their prejudices more fully during subsequent interviews. And I expect that it's the same with Jews and other groups. Circumstance might drive expressions of prejudice away from public view, but it doesn't take much to reveal them.*

* As long as I've got your attention: "Negroes Are Anti-Semitic Because They're Anti-White." Food for thought.

This is only somewhat related, but a third grade student was singing a song in class today, and I asked him what he was singing. "I learned it in church," he said. He smiled. "You wouldn't know it because you don't go to church because you're..." and he runs up to me and actually starts rubbing me yarmulke with his palm.

I don't know how to wrap this up, but anyway it's besides the point. I've got to get moving, there's cleaning to be done, Passover starts on Monday and I've got to get ready.
Posted by Michael Pershan at 8:56 PM