[From: The Book of John and Betty] 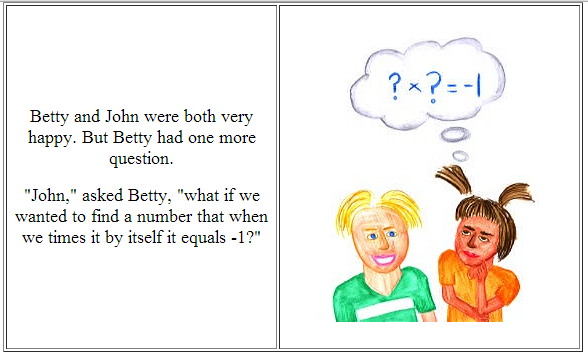 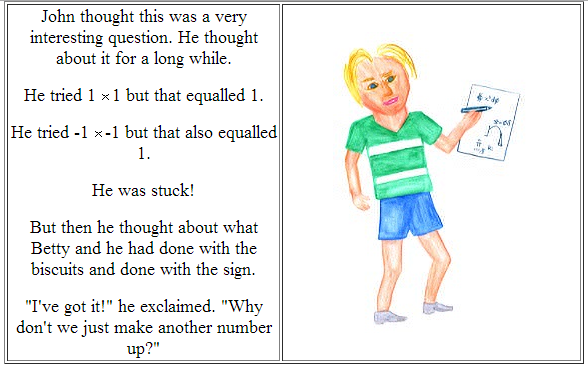 "Wait, what?" Betty said. "Just make another number up? Seriously?"

"What does that even mean?" Betty said. "I mean, I guess you can do whatever you want in math, sure, but why would we make up an answer to an impossible question?"

"Curiosity? What sort of curiosity are we talking about here? You tried squaring 1 and -1 and you didn't get -1. Great. That's proves it: my question had no answer. It's a great argument, simple and beautiful, so let's move on."

"Sometimes in math we just need to take a chance, Betty. Maybe for once in your life could you learn to take a chance?" John stared at Betty. "We're having fun now, aren't we?"

"Fine then, let's make up another number," Betty said, pacing away from John. "But while we're at it, I've got some other numbers to invent. I mean, you can't divide by zero, right? Let's make up a number for that. Let's invent a number that stays the same when you add five to it, and another number that's bigger than itself. Let's just throw new numbers at every impossibility in mathematics and call it a day."

"Oh, come off it, you big stickler," John said moving his beautiful golden hair off his ears. "You're completely ruining our afternoon, just like you ruin everything."

"Well as long as you're at it why don't you invent a number to fix our ruined afternoon you ridiculous elf."

And suddenly trumpets sounded and Heaven opened and Lord Math Teacher descended upon the White Room where John and Betty fought. And lo a chalkboard appeared as well as chalk and John and Betty were verily impressed.

And the Lord Math Teacher spake, saying: "John, Betty, you are both loyal servants, and I wish to praise you for your great attitudes and overall grit. But let Heaven and Earth bear witness: there indeed is a difference between these numbers you wish us to invent, oh Betty, and that which John has invented. Know it: John's number will lead to no further contradictions, while your numbers lead to contradictions, which is basically a no-go in mathematics, for contradictions are impure in the eyes of the Lord."

"Lord Math Teacher? Lord?" Betty waved in the Lord's direction. "Excuse me? I have a question?"

"How do we know that inventing a square root of -1 won't lead to contradictions?"

"An excellent question, my daughter!" Lord Math Teacher replied. "Yes, and unfortunately proofs of non-contradiction are sort of dicey but I swear upon the heavens that Model Theory has some of the answers. I am Lord Math Teacher, and I hope that answered your question."

And then from the skies a bell rang and the Lord departed.

And this answered all of Betty's questions and she was entirely satisfied with John and complex numbers for the rest of her days, verily.
Posted by Michael Pershan at 4:53 PM