The Exploding City of Las Vegas, And An App That Helped 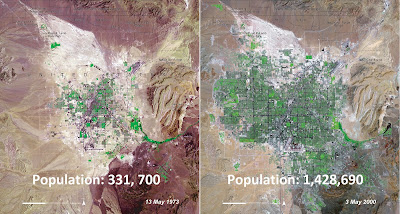 That's some pretty remarkable growth, Las Vegas. I asked you guys what questions you had after seeing this image, and a lot of you wanted to know what the population was now, or what it would be like in the future. Those are some great questions, and of course we could go down that route. There are a lot of great population modeling problems, and this could be a great population modeling problem.

Here's another great question: Does the green splotch grow faster, slower, or the same as the population?

We recorded opinions, arguments and predictions. Then we took rough estimates for the actual area of the green stuff in 1973 and 2000. 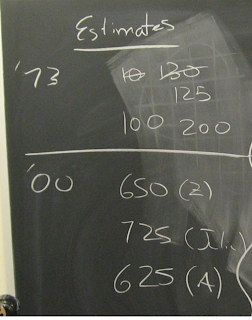 The problem with finding area is that Greater Vegas Township isn't shaped like a rectangle or anything else we know how to deal with. So we've got a blob, and we need a technique for finding the area of a blob. We talked about it a bit, and they mentioned that grids would be helpful, so I gave them what I had. 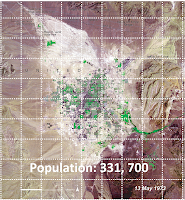 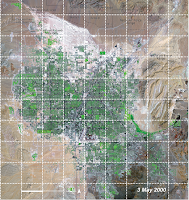 There were two different techniques that I remember seeing for approximating the area. Some students wanted to cut out the green splotches and impose it on some graph paper for a better estimate. (Good job, kids: a more fine-grained grid is going to get you closer and closer to the "true" area.) Others went about counting and chopping up the green parts to fill out the squares. (Maybe there were more techniques, but honestly this lesson was a few weeks ago and I've gone rusty on a few of the details.)

In the end, the kids ended up with their approximations. But we wanted to know how good our approximations were. Enter SketchAndCalc, a really solid app. SketchAndCal lets you import pictures and trace out the perimeter of an area, and it'll spit out the area. (A digital planimeter!)

So, I traced Vegas: 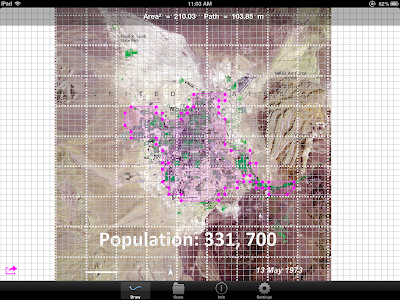 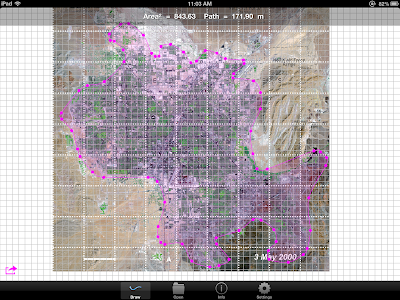 Using the info from the app, the area of Greater Vegas grew a bit slower than population. We had a great conversation about why this might be. Do cities tend to grow denser as they grow outward? Why would that be?

Anyway: this was a ton of fun. It's all posted over here, if you want the files.
Posted by Michael Pershan at 9:37 PM

Email ThisBlogThis!Share to TwitterShare to FacebookShare to Pinterest
Labels: From the Classroom, Geometry