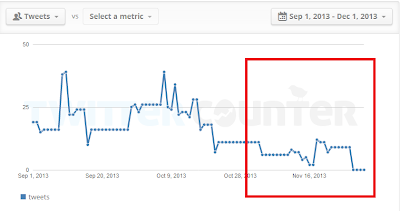 This is just to say that I spent November tweeting less and blogging more, and it made being on the internet more productive for me than it had been in a long time.

We read poems, short stories and novels differently, and one of the the many reasons why is because of length. What we expect from a piece of writing depends crucially on how long it is, and for good reason. Writing is hard, and we expect people to write something that's roughly as long as it absolutely needs to be. A novel, presumably, couldn't have been a short story. I'd suggest that much of the power of short poems comes from their brevity. Their length announces a sort of immediacy and clarity that ought to come as revelations. (A haiku isn't the sort of thing that's supposed to need argument or evidence.)

All of this to say is that, much to my past frustration, it's very hard to be subtle on Twitter, because the brevity of any tweet makes anything you say come off as a proclamation. That's good for a gal or guy with a lot of confidence, but I found myself just making people angry on Twitter with (what I thought were) speculative comments. These days I find Twitter most helpful when (a) I want to proclaim! or (b) I have a question.

Some more reasons why I prefer blogging to twitter for working out ideas:

Of course, Twitter is good for many things, and its brevity is a great deal of what makes it great. And, of course, you should do whatever you want to do. But November has been a very happy month for me.
Posted by Michael Pershan at 7:46 PM