The Six Acts of a Mathematical Story

Act One: Introducing The Central Conflict 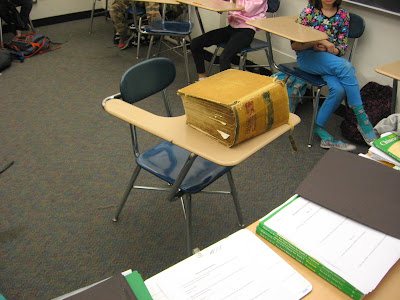 "What's the most ridiculous looking book I can walk out of here with?" I asked. The librarians were incredibly helpful. And I lugged this enormous dictionary back to my classroom and hid it in a filing cabinet.

I told the 4th Graders that I had a surprise for them. In the time it took for me to pull this monstrosity out of my filing cabinet and drag it to the middle of the room, the kids already started asking how many pages long it was. I didn't say a word. I just went to the board and started recording guesses. 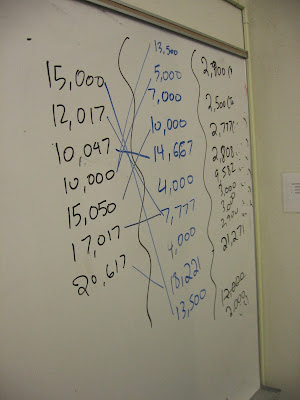 The first round of guesses were all in the 10,000s, so I took a folder and stuck it after the 100th page. I told them where I'd placed the folder, and we took another round of guesses. The kids seemed split on whether this data made their initial guesses too high or too low. (You can see the lines connecting the initial guess and the second guess.)

That was interesting, so I moved the folder to the 500th page and took a final round of guesses. You can see those in the third column.

[Insert picture of last page here. I'll get it when I get back to school.]

The dictionary ends on page 3,210, and we marched that page around the classroom. (Wikipedia says that it has 3,350, though I don't exactly know how they're getting that number.)

Act Four: Those Clips That Sometimes Show Up After The Credits?

"What would be some interesting math questions that we could ask about this book?" 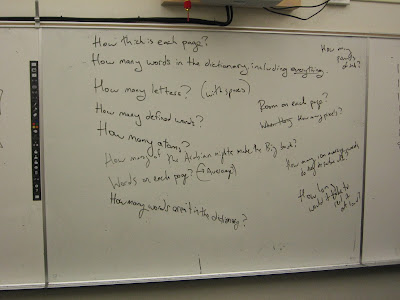 The bell rang, and the kids went home, or to some other class, or whatever it is 4th Graders do when they're not in my classroom. 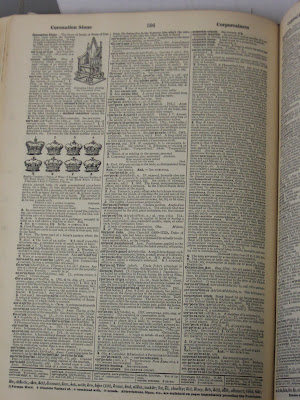 Everybody got a dictionary page. I photo-copied them and handed them out. 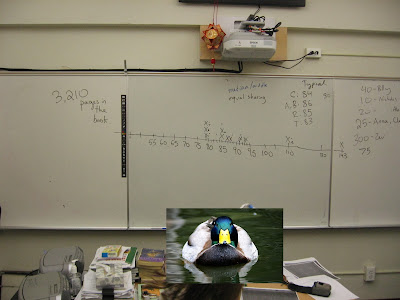 There's our line-plot. Most kids figured that, based on the data, either 84, 85 or 86 was the typical number of words defined on a page.

(One girl -- the duck, actually -- insisted that because she had counted 143 bold words on her page, that this was the typical number. I think that she just didn't like the idea that her counting was somehow in vain. Either that or she was burned out from Halloween.)

There are around 276,606 words defined in the dictionary, though this is tough multiplication for my kids to do. 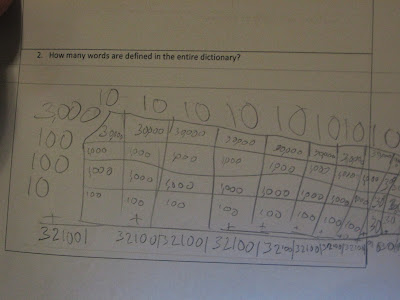 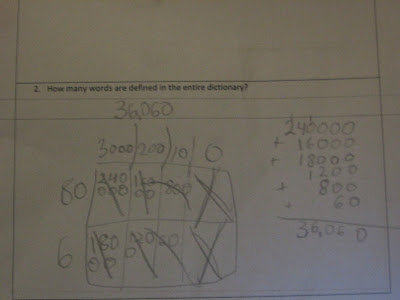 I'm having trouble finding out exactly how many entries there are in the 1934 Second International Edition, but Wikipedia reports that the Third International Edition "contained more than 450,000 entries, including over 100,000 new entries and as many new senses for entries carried over from previous editions." So that should mean no more than 350,000 for the Second Edition, right? Not bad, kids.

With the rest of class we tried to knock off a few more of their questions. Did you know that linguists estimate that there are roughly 1,000,000 words in the English language? We figured out (roughly) how many words are not defined in this dictionary.

We also had a fun conversation about how to figure out how thick each page of the dictionary is.

There you have it. This was a ton of fun, and I certainly recommend checking your local library for a book as silly as this one. I'd love to help those without access to a physical copy to play with this. I uploaded some of my pictures to 101qs, but please let me know if you think of certain pictures that would make this problem more useful to you.
Posted by Michael Pershan at 10:18 PM