It's really hard to find models and contexts for Unit Circle Trigonometry. Like, really tough. The one go-to that everybody uses is the Ferris Wheel, which is great, but it's practically all that we have.

"Oh, no!" you'll say. "What about all that astronomical stuff? What about the percentage of the moon that's visible on a given night?"

Well, two things. First, why would you want to model the percentage of the moon that's visible with a sinusoidal function? If I really want to know what the moon's going to look like on January 17, 2015, then I'm just going to subtract a bunch of 29.5 day intervals from 1/17/2015 until I land back on my data.[1]

The second problem is this: 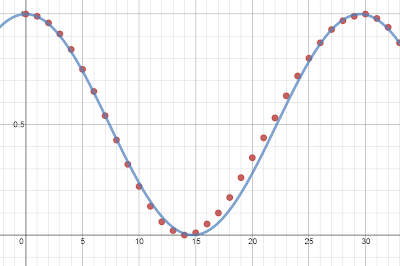 The moon's visibility isn't sinusoidal. Then again, of course it isn't. If it were really sinusoidal, then its orbit would be circular.[2]

What is a Trigonometry teacher to do? Practically nothing interesting in the world shows truly circular motion. (Oh, pendulums?) And even the things that do show circular motion are rarely worth modeling.

We watched the video, and I asked them to graph height vs. time on a Post-it. 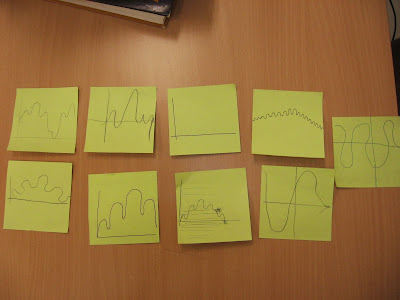 I tossed these under the doc camera, and we narrowed down our options. I chose two at a time and asked the kids to compare them, which usually resulted in us throwing out one of the graphs. When we got stuck, I suggested that we separate the two wheels and figure out an equation that determines the motion of each. After some thinking, a kid suggested adding the equations together. I asked her to show us what she meant, and she produced this:

This lesson was fun, tough, and a genuine context for some Daily Desmos-style sinusoidal modeling.

This year I find myself just going nuts with Ferris Wheels and rides. We've already studied square-shaped tracks and rides, inspired by this lovely visualization:

What's next? There are a lot of rides out there, but many of them seem to be versions of this Double Ferris Wheel. Maybe the next step is to get weirder. Like, what sort of ride would have this height graph?

I'm running out of rides. Ideas?

[1] In other words, all you need to model is the periodicity of the moon's cycle. There's nothing that pushes people or students to pay attention to its sinusoidal nature.
[2] In class we model the visibility of the moon, and I tried to escape these problems by asking "Is the curve of the moon's visibility sinusoidal or not? Is it like our Ferris Wheel's motion, or is it a different pattern?"
Posted by Michael Pershan at 8:35 PM