Is Your Own Math Work Shareable?

(Lots to disagree with here, kids. Get excited!)

Why do kids hate writing about math? Here are some possibilities:

Without a doubt, these factors all play their part. But I think that there's something else going on.

Here are a few pages from one of the notebooks that I do math in: 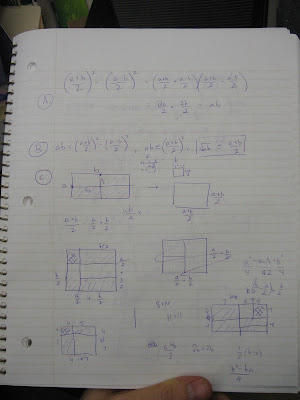 There's a ton of scribbling, some diagrams, some arrows, all of which make a ton of sense to me right now but would take a significant amount of work for anyone to decipher.

I tend not to do math in a way that would make sense to anyone else. The question is, should I? What would I gain by presenting my notes in a cleaner, more legible way?

I can see two reasons for writing this up in a cleaner way.
Let's immediately dismiss the first possibility as unrealistic. These aren't new discoveries, and they aren't even new ways to think about old problems. This is me trying to understand some ridiculously well-trodden math. Why would I share this?

The second possibility is a more serious one. And, look, I'm numero uno in line for the "Writing Helps Me Think More Clearly About Things" rally. (I'm getting clearer on these ideas as I'm writing it right now which is fairly meta.) But writing a clear statement about math is only occasionally what I do when I want to get clearer on a mathematical idea. When I want to test my learning, sometimes I rederive my result. Sometimes I try to tackle a new, but related, problem. Sometimes I take a walk and think about it.

What's behind my own tendency to skip the writing-up process when I'm doing my own math? As before, it might be laziness, it might be a lack of skill. Upon reflection, I think that it mostly has to do with my preference for problem solving. I typically figure that if I don't understand something, then eventually it'll get in the way of my ability to solve problems. Sure, I could prevent that by trying to sort everything out now, but that wouldn't be nearly as much fun as trying to solve another problem. "I'll understand everything with the depth that it currently needs," seems to be the principle by which I usually operate in my own math work.

So, here are my (somewhat loaded) questions:


Lots, lots to disagree with here. Please do! Let's get closer to the truth together.
Posted by Michael Pershan at 5:16 PM