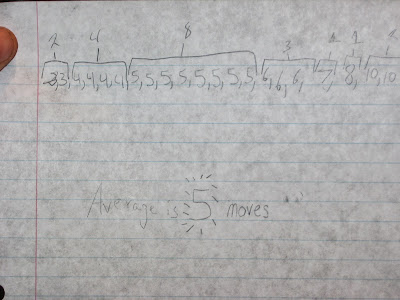 It became clear from my kids' organized data sets and the ensuing conversation that they believed two things:
I very much wanted to put pressure on the second belief, to set them up for eventually ditching the first belief. But I needed some more data.

The first thing I did was a quick experiment that I took from TERC. I took a bucket of dice, and everybody in the room tried to pull as many dice out of the bucket as possible with one hand. A kid kept track of all the results in a line plot at the board: 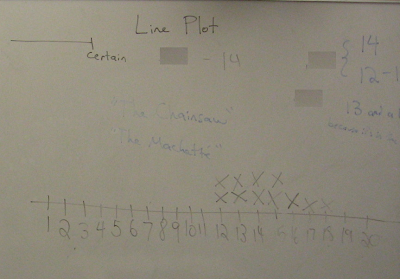 (Oh, and then I went. I pulled out 31 dice. Should we count that? No? Then there's a word for that, we call that an outlier. Got that?)

We were lucky enough to have a tie, and a tie between an even number of points, no less. I asked kids what the usual, normal, typical number of dice for one of us to pull out of the bucket was. They said 14, or 13, or between 12-14. (I clarified that I just want to know the most normal number, but that felt artificial. Offering a range of numbers seems completely reasonable for this data set.)

Then I asked the kids what the data looked like. This was important, because I wanted them to pay closer attention to the shape of the data, so that they would start thinking of the data set as a whole. (Thanks again, TERC!) They went for "The Chainsaw," or "The Machete."

Anyway, I cooked up a page with some line plots. Their instructions were to find the typical number for each, and to name each line plot: 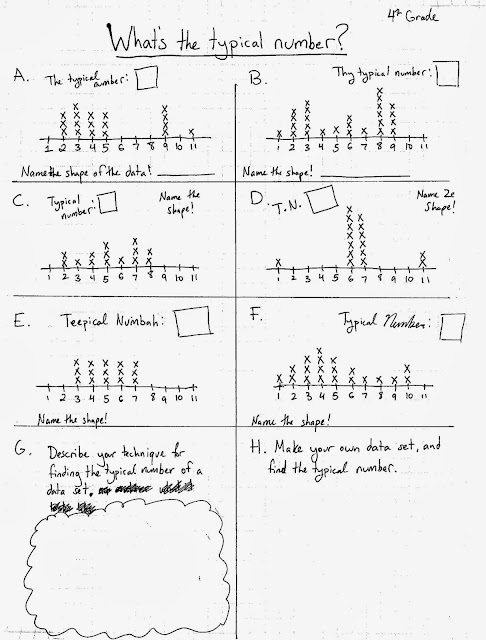 As they finished, I paired the kids up and pointed out their disagreements, and asked them to discuss their choices. They did this nicely. And then we had a conversation together collecting some of the rules they had come up with for finding the typical number: 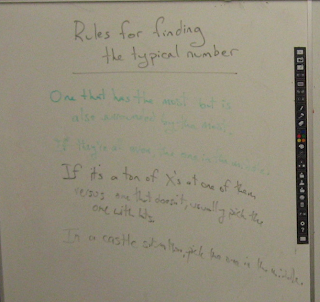 Their rules:
BTW, this is a castle situation: 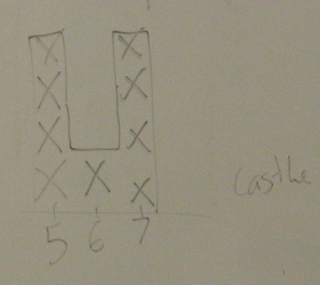 To plant the seeds of this, and to tie up the Mastermind stuff, I showed the kids this bit of research:

The idea that an average could be 4.340 was absolutely baffling to them. But some of them had already suggested that, when there is a Twin Tower situation (Good Lord these kids...) that the typical answer should still be between them, so that we'd get half responses. And what if there were some more data points a bit to the right of the Twin Towers? Wouldn't that suggest that it's typical to be a bit to the right of the towers?

It was a good, difficult conversation for the kids.

And, for me? I had hated on the mode from my high school perspective. "Why do kids need to know mode? What's the purpose of mode, ever?" I loudly questioned.