We had finished up our puzzles, but we still had a question: How many turns does a winning Mastermind Puzzle usually take?

I pooled data from the kids' Mastermind Puzzles and from the boards that Anna's 6th Grade class (totally coincidentally) happened to be making, and made sure that they knew what data means. (Turns out? Cell phone plans have forever changed kids' awareness of the word "data." Hmm.)

Then I asked them to organize all of the data any way that they saw fit. (ala TERC. They have kids doing this with counting the contents of boxes of raisins.) 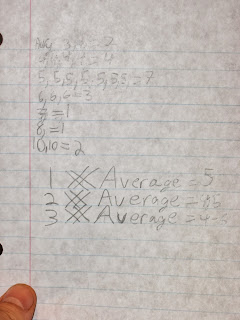 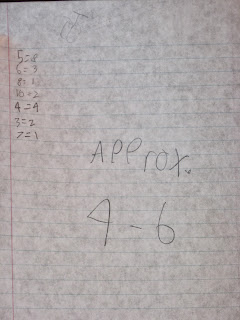 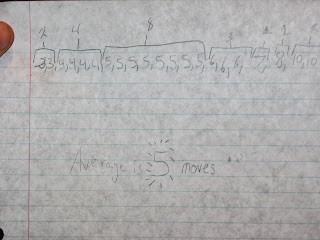 This, frankly, was a bit open for their comfort and the kids weren't so into it. There wasn't a whole lot to talk about in the different ways they organized things, though I tried. And my attempts to spin a conversation about what constitutes the "typical" number from the data set were foiled by the widespread agreement that the typical number of turns is 5.

But I noticed two really interesting things from their work, which you can see in the pictures above:


I decided to poke at equality. I asked them what "equals" means. The kids offered two definitions, and we put them both on the board: 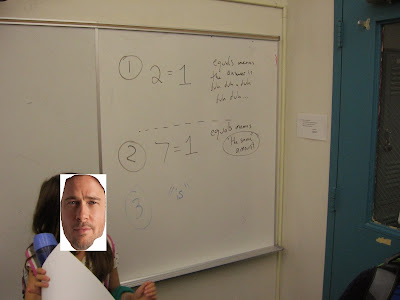 But 2 + 1 = 3 + 0 was much more problematic for them. How do you read this as offering an answer to some question? A few kids tried to suggest that these were answers to the question "Is 2 + 1 the same as 3 + 0?" but I didn't like that because that's not what they said "equals" meant.

I argued that equals means the same amount, not "the answer is...", and by the end of class the kids were vocally agreeing with me, so I guess that worked? I got a better sense of where we stood the next day, when (after looking at their homework) I realized that they didn't know what an equation was either. 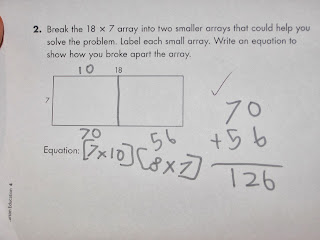 This, of course, is super-related to what "equals" means. The idea that an equation is any problem is supported by the notion that equals just marks the answer. I'll spare you the details, but we sorted this out too.

Next up, putting pressure on their notion of average.
Posted by Michael Pershan at 9:33 PM