Mastermind is a great game. We spent a bunch of time with it in 4th Grade recently, and it was great fun. This is the first of a series of three posts where I get to self-indulgently record all of that.

We started by just playing Mastermind together against the computer. We spent a day basically just doing that, justifying our moves, imposing a grid on the board to make the discussion easier. We used a random number to decide who was going to pick the next move. It was a great deal of fun.

Also, isn't it wild and disturbing that when we need a fair way to pick someone in our class we use randomness? That's actually pretty messed up, now that I think about it...

We start the next day with some more games. The week before had been spent using multiplication to tackle some combinatorics questions (e.g. with Scrabble pieces, with restaurant menus) and I asked the kids some questions in between rounds. ("How many codes could it be once we know all the colors?")

Half way through the period, I ask kids to ask some interesting mathematical questions about the game. We got some good stuff out of the kids:

But more about that later. First: a Mastermind Puzzle is a board that is solvable in just one move. I showed the kids a board that I made. Then I asked them to make their own. Which is actually really hard for anyone, 4th Graders very much included. Some of their boards worked, but a lot of their puzzles relied on slippery reasoning. 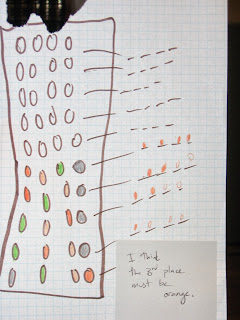 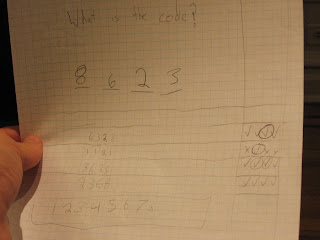 But there was a lot of hard thinking going on, and the kids got to be creative. So that was still worth it, I think.

Next up, pooling all of our Mastermind puzzles to ask some questions about the whole set of them.

Posted by Michael Pershan at 9:30 PM