Carol Dweck vs. The American Dream 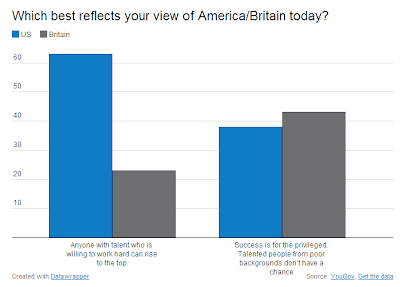 Americans believe in hard work. You can see this in the poll above. The Council on Foreign Relations reports that American's belief in the power of hard work is relatively unchanged since 25 years ago:

Our culture stands in contrast to that belonging to other nations. Michele Lamont, in her study of French and American upper-middle-class workers (which I haven't read, just to be clear) argues that crucial to French conceptions of moral character is intelligence, while crucial to American moral characterizations is ambition and hard work:

So: Americans believe in the power of hard work to grant economic achievement, even in the face of widespread evidence that this is not the case. 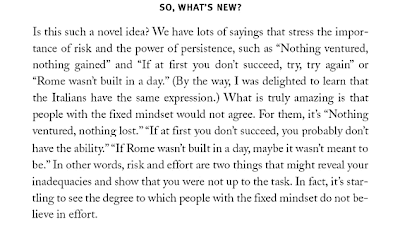 She explains that people with fixed mindsets about X won't work hard if the task is seen to demand X.

Take another quote from her writing:


We often hear these days that we've produced a generation of young people who can't get through the day without an award. They expect success because they're special, not because they've worked hard.

Is there a tension here? Dweck shows that having a fixed mindset about intelligence is extremely prevalent. [citation needed] She also argues that having a fixed mindset causes you to discard hard work, since "risk and effort are two things that might reveal your inadequacies and show that you were not up to the task." Despite this, there's a robust observation that Americans (incorrectly!) believe that hard work is a key to economic achievement.

How do we square Dweck's research about intelligence with the American obsession with hard work? I see only a few possibilities:
What do you guys think about this? Do you see the tension that I'm pointing to? Or am I totally off?

I think that there's a certain irony in Carol Dweck's work. She has pointed to a fixed mindset of intelligence as important in determining how much hard work you're willing to put in to your work. She consistently laments the lack of hard work that results from seeing intelligence as a trait, and that this is the difference maker in academic achievement.

So you might've believed that Americans are, on the whole, an entirely lazy bunch. But, to the contrary, Americans are relatively hard working, and extra-ordinarily obsessed with the notion of hard work in determining economic success.

If that hard work is an indicator of an incremental mindset, then intelligence must be one of the few areas relevant to professional life that Americans actually do have a fixed mindset about.
Posted by Michael Pershan at 8:40 PM