The First Three Days of Trigonometry

We watch this video.


We actually watch it twice. It's cool. We talk about some of the interesting things. I ask them what they were noticing. Some mentioned the shape of the ride, others that there's a bit of shaking in the seats, and others were thinking about what exactly happens when that guy swings off the top of the ride. (No, seriously, go watch the video if you haven't yet. It's fun.)

I ask them my question: How does the height of a person change as they go around this ride?

They sketch a graph in their notebooks. I forget to take pictures of it for the blog. Instead, I remember to take this blurry picture of the board where we recorded the camps: 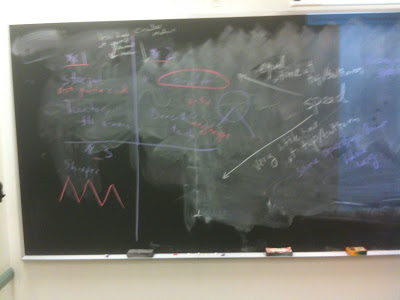 So that's probably unhelpful. But on the left side we've got the three ideas:


I urged the class to temporary elide the differences between the two curvy graphs, and join brothers in arms to form a single Kurvy Kamp, allied against those who thought the graph was spiky.

Here's something interesting: we actually only had one customer for the spiky graph on that initial go around, when kids were sketching graphs in their notebooks. But as we talked about it some more, a few more voices for spikiness piped up.

We talked about what sorts of predictions spiky vs. curvy graphs make. A few kids voiced the idea that the spiky graph predicted that there was very little time spent at the top of the ride. We watched the video again.

Settled: the graph is curvy, not spiky.

(PS We also had a nice conversation about where people chose to put the zero height. People were trying to avoid having to use negative numbers in their choices of baselines. No one, it should be pointed out, chose the center of the wheel as the zero height. That's a non-obvious choice that needs to be motivated, not just thrust into the situation.) 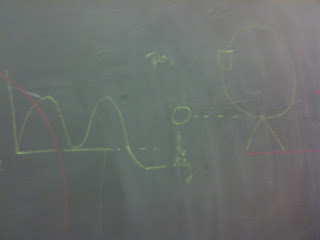 A weekend passes, and I'm thinking that we're going to spend a few minutes in class reminding ourselves of what we did last week, and then we're going to try to make things more precise.

I put on that video again. My plan is to ask them to imagine a bigger wheel, and to ask them to graph that, just to get back in the swing of things. But as we're watching that video, somebody just up and says,

"I think we need to be careful about whether we're talking about the peoples' heads or the carts they're in."

Well, see, now that's interesting. Pretty soon we've found ourselves confused about how the motion of the people and the carts are related, and I ask them to whip out their notebooks and draw graphs that keep track of three heights: the height of the heads, the height of the seats, and the height of a notch on that little inner wheel near the center of the ride.

The class was pretty much split between these two possibilities: 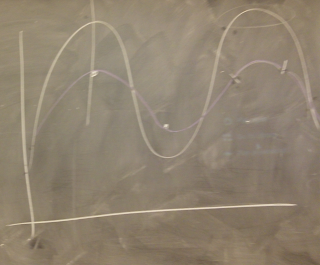 This is a round that the folks who thought that everything peaks synchronously definitely won. Their arguments were clear and convincing, and mostly hinged on the fact that you could connect the heads of the people, the seats of the carts and the edge of the wheel with a straight line.

And then somebody said that they thought the edge of the circle was going faster than the inner wheel. That's interesting too, and the class was split on whether they were buying it or not.

At the heart of all this? A deep confusion about how to square the fact that there is constant rotational speed with the idea that there could be non-uniform speeds at different points around the ride. I think that the difficulty of pairing easy, clean constant circular motion with messy, more subtle notions of speed was at the heart of the spiky/curvy debate the day before.

Things are basically settled by the time I ask students whether they'd give a Gold Medal to the guy who runs the outer ring of a racetrack in 10 seconds, or the guy who ran the inner ring in as much time.

My initial plan was to just urge them to figure out ways of being more precise with our measurements of heights, but I was glad for the way that class went. In the last few minutes we start talking about getting exact values for the height, but we run short on time.

The thing is, yeah, they don't really remember special right triangles. I figured they wouldn't, so I give them this Warm Up problem set at the beginning of class: 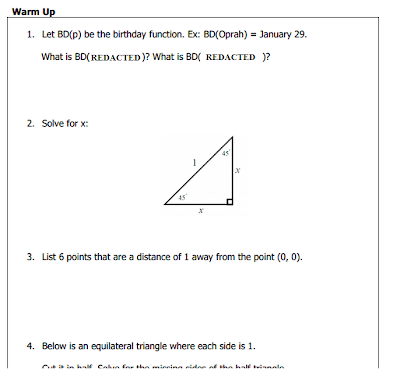 So we talk about that.

And then I ask how we can get more precise with our graphs. Enough is enough with this messing around. Let's settle this.

We decide to set the initial height at 0. And then it repeats every 6 seconds or so. So at least we've got those two points. And what about half-way, at 3 seconds? Well, yeah, that would be the maximum height. What about half-way to that, at 1.5 seconds?

Another unexpected surprise from a student. He gets up and says, look, I think it would be best if we split up the Ferris Wheel into eighths. And it takes an equal amount of time for a seat to go from one of those sections to the next. And then we should just number the heights around those eighths. 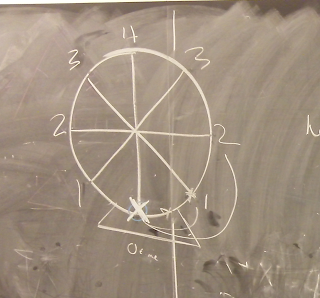 So I ask him to graph it. 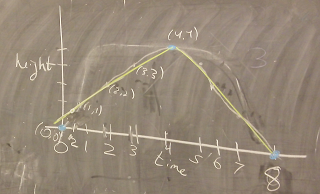 Me: You understand, this is spiky, right?
Kid: Yeah. But maybe spiky is right!

I love it. Brilliant.

And now we've got a real argument going on. What's so fascinating to me is how fervent the spiky folks are. They're not just excited by that whole "split the wheel into eighths" argument. They're also tossing out things like "Well the wheel is moving constantly and so the height is changing at a single rate!"

But I've been patiently waiting for this moment for three days. I tell the kids, correct me if I'm wrong, but I think that our disagreement basically comes down to this: 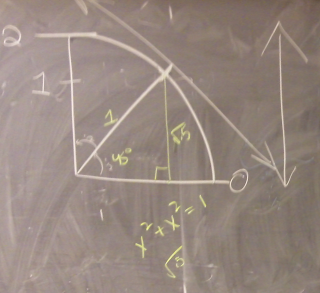 [Except, imagine this without all triangles and angles and stuff.]

When you do half a turn here, does that mean that you've gone up half the height?

And we start busting out triangles, and the bell rings.
Posted by Michael Pershan at 6:55 PM