I just cooked dinner. It was very yummy. 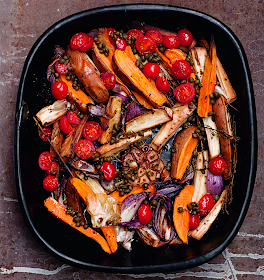 I followed a recipe. The truth is that when I cook I almost always follow a recipe. And for good reason. Cooking is hard, and I didn't really grow up doing much of it, but I like making good food. More importantly, when I'm cooking there are almost always other people that I'm trying to feed, and I want to make good food for them.

There's no point in not following a recipe, right? The people who write good cookbooks know what they're doing, and their recipes turn out great.

I've got friends who swear that they never cook from a recipe. They say that they just can't stand it.

I thought about these friends as I was making dinner tonight. I was making a ratatouille and some roasted roots, and I kept on forgetting amounts of spices, or how long things were supposed to stay on the stove for, and I didn't have room for the cookbook in my very small kitchen, so I was constantly running back and forth to another room to consult the book. That was sort of annoying, and (if we're being honest) a little embarrassing. Like, shouldn't I know whether the tomatoes go in with the peppers, and whether that matters?

Last night was annoying too. After picking out the next night's dinner, I made a grocery run. The recipe  I had picked called for eggplant; the grocery store was all out of eggplant. The recipe called for grape tomatoes; the grape tomatoes looked sort of nasty. It would have been really nice if I could've just changed recipes on the fly.

Besides for the convenience of being able to think up dishes on the fly, I'm a little bit jealous of my friends who don't use recipes or cookbooks. They're always making new, interesting creations and combinations of food that I just never think of. It's like, how do they come up with this stuff?

It's not as if I haven't learned anything since I started cooking for myself. Of course I have. To start, I've got this great collection of recipes that I hold in my head (and in a binder). When I read a cookbook, I recognize recipes that I think that I could do and that would taste good. And I'm really much better at managing the kitchen, chopping vegetables, telling when things are done, etc.

But I sort of wish that I could just come up with dishes on my own.

My wife and I have got this idea that we can learn how to do this. Here's our plan: one night a week is going to be Challenge Dinner. For Challenge Dinner, one of us does the shopping, and the other has to use whatever ingredients are offered for that night's dinner. So I can buy my wife broth in a box, parsnip and eggs, and she's got to figure out a way to make that into a decent dinner.

Who knows if it'll work. But wouldn't it be nice to try?