Dan's asking us to give this activity a makeover: 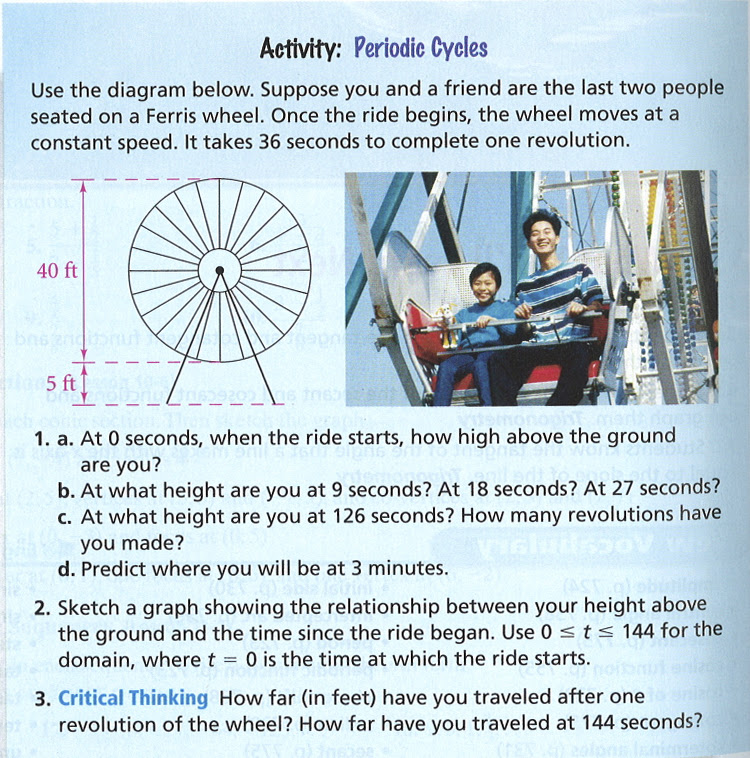 In some ways this is a classic pre-Dan Meyer problem. There's a call for prediction. There's a text-heavy scenario with some stock footage that could easily be replaced by a simple video. There's an abstraction of a Ferris Wheel that's too eager to offer the minimum height.

So we could give it the 3act treatment. We'd start by figuring out an image or video that would create the need to know where the Ferris Wheel will be at a certain time, to motivate the prediction.

But when exactly would you need to predict the position of a spot on a Ferris Wheel? All I can come up with are contrived scenarios:


Whatever. This isn't working. And the power to predict isn't what's interesting about this anyway.

Last spring I started class with this video:


(Truth is, I actually showed two videos, one of a larger, slower Ferris Wheel, and the one above. I asked kids to draw graphs of both.)

I asked the kids to draw a graph showing the height of one of these people over time. We needed an example to get everyone on the same page, but then whiteboards were distributed and the kids were on it.

Some kids made graphs that were all pointy like this:

Others thought that it would be nice and smooth.

Once I pointed out this disagreement to the kids, we had a nice old-fashioned slug fest. Why ought it be pointy? Why ought it be rounded? What evidence could we bring? Would you play that video again? Of course I will.

What's the difference between a pointy and a curvey graph? What does reality look like according to each? What does it mean for the world to be like one and not the other?

Eventually we used this applet to be especially careful in our observations. The argument was settled. There were winners, there were losers. Folks licked their wounds, figured out where they went wrong. It was fun.

I've done the Trigonometry thing three times now, and I've started to become convinced that real-world prediction is just harder with periodic functions, because of their periodicity. Things that repeat aren't super-interesting to predict. Plus, the fact that it's periodic means that you don't really need much math to get a decent prediction. Which, I guess, is a lesson of its own sort, but still...

I tend to do a lot of astronomy in trig. We take a look at moon cycles,  we compare sunsets at different latitudes over the course of the year. We can look at tide-charts if that's your thing. The problem is that the power of prediction here is fairly low. The moon cycle repeats roughly every month. Once you know this, there isn't a ton that you don't know, unless you want to know exactly how much moon there is at a given instant in time. And why would you?

(Maybe there's a good werewolf problem hidden in there somewhere. Like, you want to know which days are full moons so you can avoid tearing out your family's guts. Or something.)

Anyway, I think the more interesting thing is the way relatively simple patterns of motion turn out to be periodic in particular ways. That argument that my kids got into was cool. If they don't bring it up next time around, I'll ask them to tell me how they know that it isn't pointy/square/circular or whatever. Maybe we don't need to get into mathematical modeling.

So my makeover is to show a video of a Ferris Wheel and then to ask this question:

By the way, for completeness, I'll mention that I've also asked kids to predict the position of a pendulum in this stupid video at 1 minute in after 13 seconds. Not the greatest task in a world, but it seemed less contrived than Ferris Wheels and such.

It was sort of fun to do in class, in a nerdy "you've got to be kidding me" sort of way. You might want to turn your sound off before viewing. It's pretty freaking annoying.

Update (8/4/13): I had a quick thought that, if you're interested in upping the difficulty of the graph sketching, you might consider different shapes of Ferris Wheels. Like, what would the graph look like if it had a square wheel? A triangular wheel? Check this out for a visualization and more ideas.