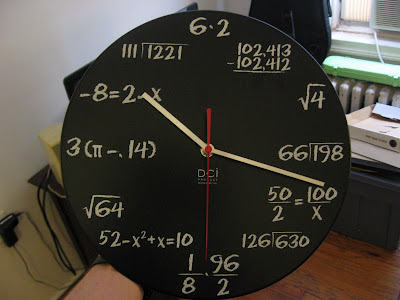 This was a gift from a student, and I love it very much. But there are some problems, mathematically speaking. (See 'em?)

Here's what I figure: I've got a can of blackboard paint in the closet, and I can remake the clockface for mathematical correctness and interest.

But what should I put for 1 o'clock? For 7 o'clock? Midnight/noon?

You'll help me out with this, right? In the comments?
Posted by Michael Pershan at 11:50 AM 9 comments:

How do you multiply points?

Complex Numbers has got to be the topic with the largest gap between how cool I think it is and how I teach it. I've struggled to teach this to kids in a way that doesn't make me nauseous, and so far I've pretty much failed. At the same time, I think that I'm making progress on sharing what I love about the topic with kids.

(I've written before about this. I ran a Global Math Department session about this.)

Here's my most recent attempt at telling a story that I like about complex numbers. I aim for practically no prerequisites, and I try to suggest problems that I think would be interesting -- for kids? -- at the bottom of each page.

I am looking for feedback. Be constructive, but tell me where I've gone wrong here. Drop a comment if you're excited. I'll be hanging out in the comments section, looking forward to some good back and forth on this.

(Also, I'm sorry that you're looking at an ad from the Scribd script. Does anyone have a pdf sharing thingy that works better than Scribd?)

(Also also, yeah, you're going to want to biggify that by clicking the bottom right corner of the Scribd widget.)

Update 7/29/13: You know, on second thought it's probably too much to assume that people will read a 17 page booklet on the internet. Maybe I'll try this post again.

Update 8/21/13: I think that a good bit of math to precede this discussion would be one that showed how certain models fail to extend to other operations.
Posted by Michael Pershan at 2:12 PM 30 comments:

Udacity has been in the news lately for getting sidelined at San Jose State, so I thought that I'd check out their College Algebra class. Here's what I found while noodling around in the course for an hour or so.

This one is a straightforward mistake. They just switched the sign of their equation. 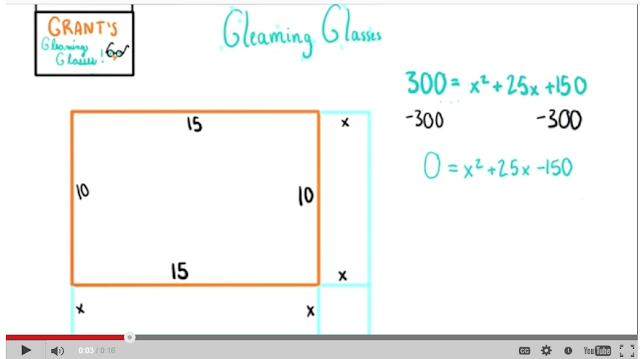 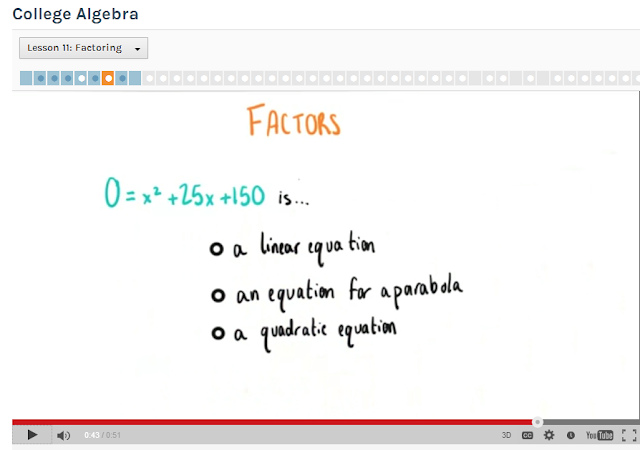 This question is pretty dumb. I don't see any reason why you couldn't relate any of these variables together in an equation. Particularly, I think it would be fun to relate Athena's level of thirstiness and how much cash she's willing to put into the machine. 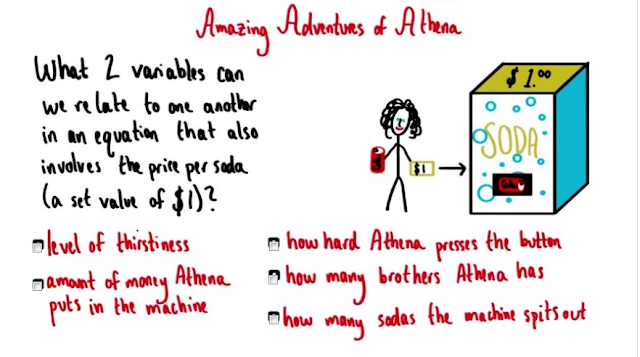 This exercise says that there are three incorrect answers, but there are actually four wrong answers.

Here's a question that's kind of dumb, but a kid pops up in the forum and makes it a thousand times more interesting: 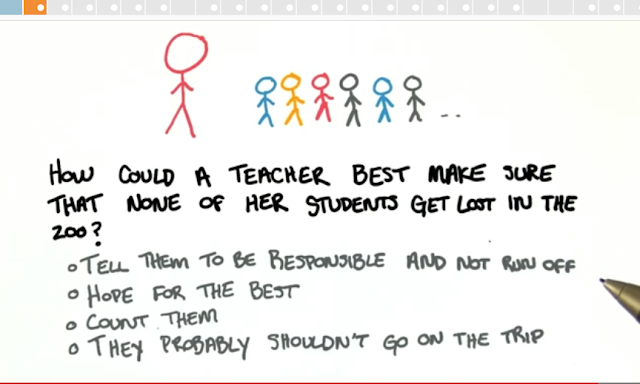 Anyway, based on what you read in the news, you might've come to the conclusion that Udacity's College Algebra course isn't very good. Turns out? Yeah, it's sloppy and not very good.

Shocking, I know.
Posted by Michael Pershan at 1:32 PM 2 comments:

It's time for this meme to die

Imagine if someone at a dinner party casually announced, “I’m illiterate.” It would never happen, of course; the shame would be too great. But it’s not unusual to hear a successful adult say, “I can’t do math.” - DB, NYTimes


Why is it acceptable in this country to say, "I'm bad at math"? Do you know many people who would admit to being semi-literate? - Change the Equation

You will hear folks saying "I don't read for fun" or "I haven't read a novel in, like, woah" and now you've got on your hands something that is far closer to what you hear people say about math.

But the very fact that doctors, lawyers, journalists, politicians, and many, many others make light of the fact that they don't know math is all the evidence you need that you actually don't need to know math to be a successful adult in America.

And, look, I hope that we have a fun time in the comments to this post, but I'm flagging one argument right now as suspicious: "WTF michael, you need to be able to count and do addition/subtraction to get by." Yeah, of course. Is that what people are talking about when they say "Oh jeeze, I'm bad at math. Always have been." Or are they talking about, say, fractions?

Anyway, that was fun to write. I should pick fights more often. See you in the comments.