[The first draft of this post was over at the Global Math Department, where I presented about mathmistakes.org. Listen to the full recording for some analysis about the way users interact with the site.]

Here are some math mistakes (source: MathMistakes.org). What do you notice?

To draw things out, kids are doing the following:

Why do kids do this? Here are 3 options:
In short, we could be dealing with guessing, reasoning and intuitions. Which of these is right?

The third option is that kids are not reasoning explicitly. A search for a model would be beside the point -- kids have a strong intuition, in certain contexts, that exponentiation should be treated as multiplication.

How can we distinguish the second and third options? 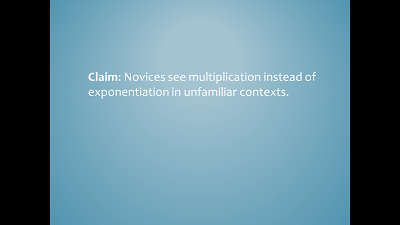 I don't have all the evidence that I need to knock out the second theory, the idea that kids are explicitly reasoning about exponents. But, from what I've seen, kids have answers to the exponents questions WAY too quickly for it to be explicit reasoning. I think that there's something to the theory that this is an intuition.

Why? For reasons that I've tried to articulate before, I think that kids sometimes see harder problems as easier ones. 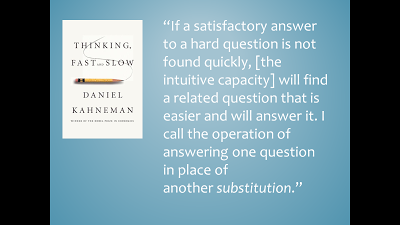 How could we prove or disprove this specific idea? Here are some predictions of my lil' theory:

I took a bunch of examples of student errors, I tried to unify them under some sort of theory that would make sense out of them. I tried to think through the theory to consider its competitors. I'm considering what would count as evidence for and against my theory. I'm trying to find testable predictions of my theory.

In other words, I'm trying to participate in the science of how kids learn stuff. And I think that more teachers should do that. Especially since understanding student errors would be widely valuable outside the classroom, but is easiest to theorize about when in the classroom and in interaction with warm bodies. Especially since digital cameras make it easy to collect lots and lots of evidence of how kids mess stuff up while you're grading.

Especially because it's fascinating, and I want to know more about it. Come up with a theory and write about it. How do people reach mathematical decisions?
Posted by Michael Pershan at 10:27 PM