Life Expectancy, and a lesson that didn't work

Here was something that didn't work with either of my Algebra 2 classes. I'm wondering why it didn't work, and if there's a better draft of this problem to be made.

The lesson was vaguely three-acty. 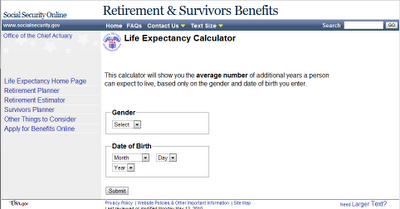 How long does the calculator say that a person born in the 90s will live? The 80s? The 1890s? Why the difference? 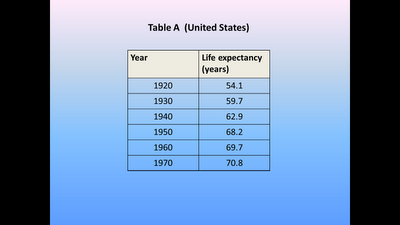 Can you find an equation that fits it pretty well? How far off would the predictions be? 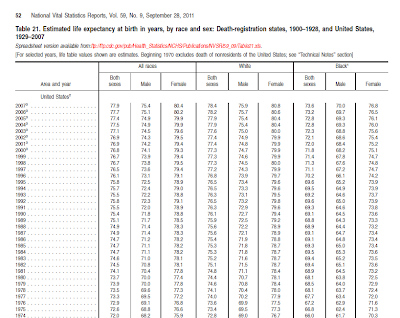 Here's our most recent data. What do your equations predict?

Other issues:
Improvements?
Help? Anyone?
Posted by Michael Pershan at 12:41 PM 8 comments:

The hard problem of online learning


Idea: Kids learn things on their own, at their own pace.
Problem: They'll get stuck, and frustrated.

Idea: We'll give kids feedback automatically that doesn't need the attention of a person, so that they can still learn stuff on their own.
Problem: That's complicated.

Idea: We'll use computers.
Problem: Computers are pretty cheap, but the quality of the feedback isn't very good.

This is a really tough problem. Nobody has any ideas that seem entirely promising. Maybe we just have to wait for the technology to improve.

Here's my pitch for a shift in the way we think about this problem.

In the world of "giving feedback to kids on math" there are two contestants. There's (1) people and (2) machines, and people are beating the stuffing out of machines. Truth is, machines haven't ever shown that they're up to snuff, as far as quality goes.

But humans have issues too. A single human can only be in one place at a time and can only focus on giving feedback to one kid at a time. We people have all sorts of stuff to do besides slavishly providing kids with quality feedback. I mean, unless you're a teacher. But, then you have to figure out a way to give quality feedback to a few dozen kids at once. Humans are limited in a way that machines aren't.

But humans are making progress. Technology is the key, here. Advances in machines have allowed humans to group together to overcome some of the limitations of being a person. If you mess around with Wikipedia,   a human being will find out and fix it. Closer to our discussion, if you ask a question on Math StackExchange you'll get a good, quality response before long. If you ask a teaching question on twitter, you can also depend on getting a good answer.

The lesson here is that the humans are making progress.

I've got no idea how to build a site that has a quality, supportive community of students and adults who will provide quality feedback to K-12 students. But there are places on the web that are like this. And if you can sustain a vibrant online community, then you can start creating more difficult tasks for students online. The rate of innovation in online curricula could speed up quite a bit.

Creating a quality community is a hard problem. Creating a piece of software that can give excellent feedback is an attractive and lucrative problem.

The pitch is: focus on the hard problem, not the attractive one.

What kids hate about school

I've struggled in the past to figure out a way to start the conversation about classroom culture with kids. Here's what I hit on this year: 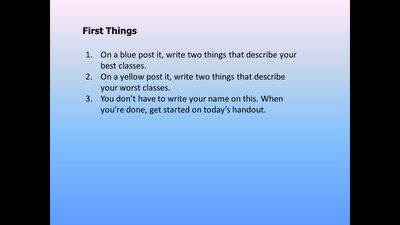 Here's what I learned:


Next step: Post these notes in a very public place.

Update: Ken Templeton has provided us with worldes, and there was much rejoicing. 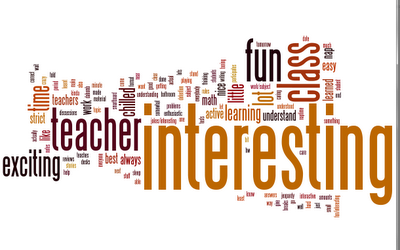 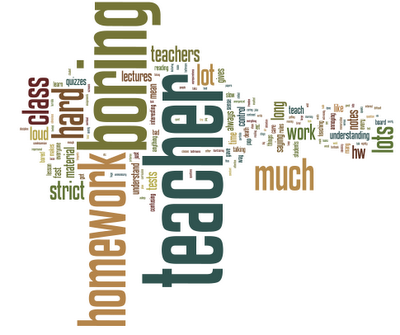 I just posted this on Math Mistakes. It comes from a piece of work that I collected at the end of class today. 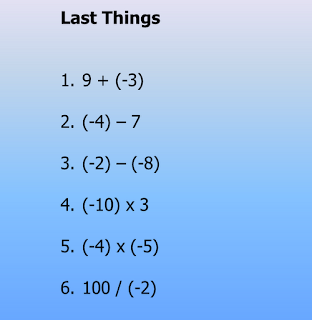 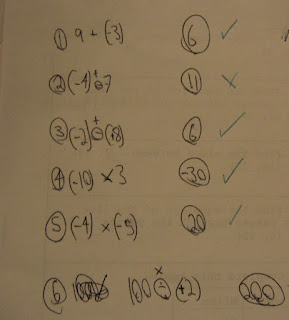 Collecting that first batch of student work was my favorite part of the day. It turned an impossible job into a difficult one. How can I help them learn if I don't know how they think? What it cost me was 3 minutes at the end of class and 10 minutes of analysis after class. And now I know who I'm (likely) going to need to target, who needs me to call home over the next few days, who seems to have their act together.

Consider this an official call for submissions. Collect work from your kids often, and take a picture of some of the interesting stuff and email it to mathmistakes-at-gmail-dot-com.

One last time: collect information at the end of as many classes at possible over the first two weeks. Try to hold in the laughter when your colleagues start complaining about the surprises on those first batch of end-of-chapter tests.
Posted by Michael Pershan at 11:43 PM No comments:

I have two first days. First the freshmen come, then the big boys. It's nice for me, because I get to adjust some of my shtick for the second round.

Assigning seats is one of these little things that caused me a ton of stress last year, because I always left it for the last minute and I always screwed things up like forgetting to give a kid a seat or giving a kid four seats. Anyway, here's how I fixed it this year: 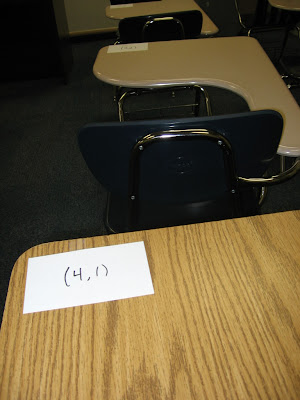 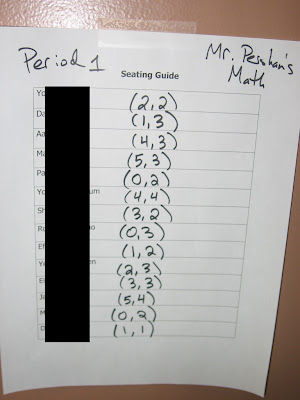 Plus, the coordinate plane is in the curriculum.

As long as I'm posting, here's some other assorted stuff from today: 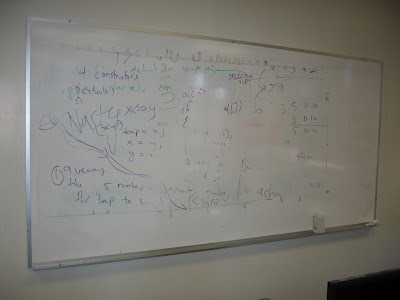 The above is the white board in the computer lab before I applied an hour and a bottle of rubbing alcohol to it. The board hadn't been cleaned in (get this) 5+ years, and it was tough work to get that ink out.

Here's my math classroom. Because of various weirdnesses about our school there are lots of times when students are in the classroom without an adult, and we've gotten ourselves a reputation for not being able to have nice things because the kids can rip them apart. 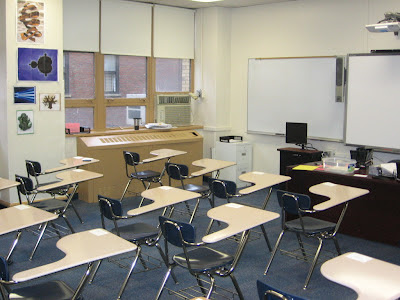 This year I want to try out the opposite approach. I'm going to try to keep filling the room with nice (but inexpensive...) stuff, like plants, storage boxes where I can keep materials, posters and calendars. Basically, I want to mark my territory.

We solved these problems today, all of which were happily stolen from Park Math:
Handout p2d1

Which already yielded this happy misunderstanding: 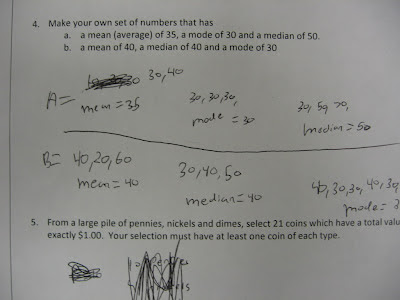 Post-mortem on a mistake I made

James Tanton's latest newsletter is phenomenal. But I got stuck on this part:

What was driving me nuts was that I thought that this argument was too loose. So I tweeted my question to the author:

@jamestanton I read and loved that piece. But I'm still confused. Based only on paper-sharing intuition why wouldn't my 2 pals get .5 page +
— Michael Pershan (@mpershan) September 2, 2012

Then, I got a series of very helpful tweets from Justin Lanier:

But he wasn't answering my question! He didn't understand me. I had to restate the problem I was having. Justin patiently repeated his argument. Why didn't he get it? How could I explain my issue better?

Then, James Tanton offered some help as well, giving a nearly identical argument as Justin's:

That's when it hit me.

All of a sudden everything that Justin and James Tanton had said made perfect sense. My mistake was clear. I saw where I went wrong. I had messed up an argument, and not an especially tricky one. Besides, this was high school math -- the thing that I'm supposed to be teaching. I felt embarrassed.

Here are some teaching lessons that I want to take away from this experience, assuming that what I experienced is true of others too:

There was a more self-indulgent post that I wanted to write. I'll throw it in the afterword, though it probably belongs elsewhere.

Here's what I remember about math and science classes in high school and college:
I'm slow. Some people are sharp, quick-witted, and that's just not the sort of thing that has ever really been true about me. The kind of difficult I had above is the kind of difficulty I've been having my whole life, as far as learning stuff goes.

To turn it back to students, some of them are sharp, some of them are slow. And I think it's important to remember that nearly every aspect of school celebrates the quick and sharp intelligence over the slow one. Let's not pretend that waiting 30 seconds before taking an answer to a question is enough (though it helps) to even the playing field. If you're slow you tend to do worse on timed tests and on homework. Your sharper classmates will solve more problems than you during class. If you're slow then you finish class and your notebook seems foreign.

Though, maybe being sharp and quick is part of what it means to be good at math. Thoughts?
Posted by Michael Pershan at 3:09 PM 5 comments: