I’m pretty confident that if I just give my kids a bunch of really hard problems to solve, the following will happen:


And I certainly don’t want that to happen.

In the previous post I explained how, last year, I responded to the pressure of keeping my kids un-frustrated by making my problem sets easier. In the first post, I explained why I shouldn't have done that. In this installment I want to come up with some strategies for helping my kids feel comfortable with struggle. I’ll keep my eye on the comments; if you’ve got something good, I’ll toss it into the post.

But first, yet another picture of a cat with a Rubik's cube. Seriously, how many of these are there on the internet? 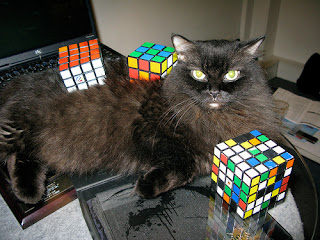 How to keep kids from getting frustrated* by difficult problems:

* Frustration is sometimes OK, but is just as often unproductive for a student. For the rest of this post, you can assume I'm talking about the unproductive stuff.

Let's start with a distinction. When a kid gets frustrated in an unproductive way while working on math, her frustration comes in two flavors:
Social frustration comes from feeling as if she's inadequate relative to her peers or relative to the expectations of others. It's real, but it comes from her understanding of other people's views of her. Intrinsic frustration is everything else. It's the stuff that would cause a person to walk away from a problem even in a closed room, with nobody watching. (I don't really know where "privately feeling stupid" fits. But whatever.)

Coming up next I'll agonize over whether this sort of problem solving should be an everyday part of my class or whether it belongs alongside other ways of doing things. I'll also post a sample problem set for the first week of class.

Posted by Michael Pershan at 10:08 AM