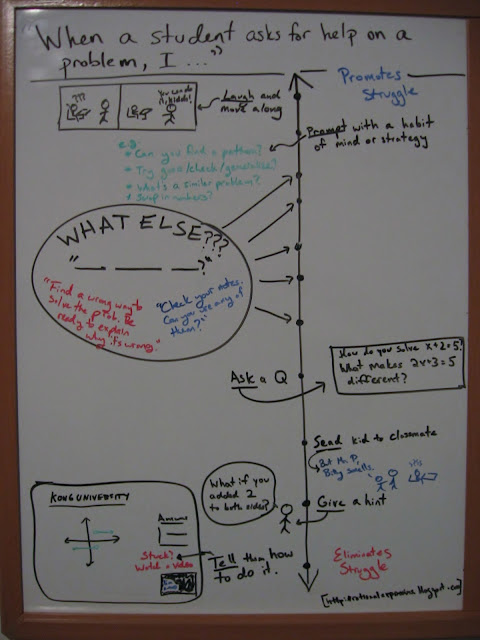 [Click here for the bigger version of the pic.]

What's missing from this chart? What do you do to keep kids working on a difficult problem?

Two caveats to my chart:
Links:

Posted by Michael Pershan at 1:02 AM 9 comments:

"You will never hear in any Khan Academy video 'memorize this formula.' " - Sal Khan

Well, that should be easy to check. And he's wrong.


There are a lot, lot, lot more times that Sal Khan asks students to memorize stuff. The way to get access to this is through the Khan Academy interactive transcripts. So just use your favorite search engine to look for the word "memorize" through khanacademy.org, and then click on the "Interactive Transcript" button on the video page. Then use your browser to search through the page for the word "memorize."

Khan Academy has a really rich resource for teachers

Forget the videos for a moment. Khan Academy has, below every video, a collection of student questions on the material. To be fair, the questions are mostly irrelevant. But there a ton of gems buried in there, and Khan Academy is definitely a place that I'm going to stop when I'm trying to figure out where my students are going to trip up on a topic. A lot of these questions are going to make their way onto the Math Mistakes blog eventually, but for now, here's a sampling.

Sorry for the small picture size. Click on 'em though -- it'll only take a second.

The thing that gets me most excited are the questions on the primary school material. One of my weaknesses as a teacher is my inability to effectively help students who are struggling with negative numbers, fractions, multiplication and division of fractions, square roots and the whole array of stuff that kids are supposed to know coming into my classrooms but don't. And the blogging/tweeting community skews towards teaching older kids, so I have fewer folks to lean on.

Digging into what kids struggle with in earlier math material is proving to be super interesting (of COURSE kids would think that a negative plus a negative should be a positive) and I'm betting that it'll make me a better teacher.
Posted by Michael Pershan at 11:59 PM No comments:

I'm working on my Algebra 1 curriculum, and I came across two really different approaches to teaching the properties of arithmetic. Because I find them interesting, I want to share them, record how I plan to use them, and then ask a question at the end.


Here's how CME introduces the properties of arithmetic to 9th graders: 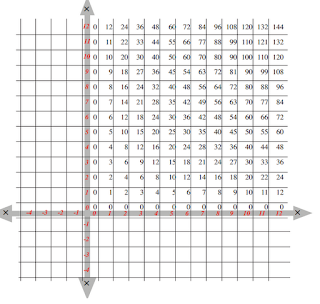 * This table is actually from Day 4 of their sequence. Day 1 observes patterns in the addition and multiplication tables, restricted to non-negatives. Day 2 reviews arithmetic with negative numbers. Day 3 extends us to the full addition table.


It's not until the next day that we have any sort of general expression of the properties of integers, and at this stage we still don't use any algebraic notation at all. Instead we articulate the "Any order" and "Any grouping" properties of arithmetic. Then we extend these principles to cover rational numbers and then the reals.


Finally, students look at various algorithms and try to explain why they're true. But that's really hard, using English, and so after students struggle to justify the reliability of these algorithms using our common language and vocabulary, the students are presented with variables. Variables are ways of talking about arithmetic with generality. And, boom, then comes the rest of the Algebra 1.


Now, here's how Park Math introduces the properties of arithmetic to their kids: 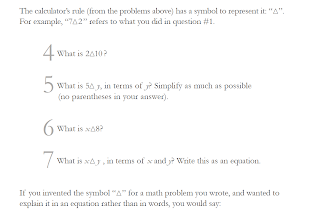 From there they move to finding counterexamples to claims about this rule, motivating the importance of mathematical justification. From there they quickly move to the introduction of new rules and, then comes this problem: 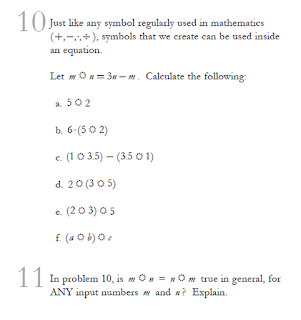 The personal puzzle is how to hack these two approaches apart and come up with something coherent and useful for my classroom. I'm assuming the pace of CME is too slow for my kids but the abstraction of Park Math is too much to start with. My current plan is to start with CME and move on to Park.

But the more interesting question is why these two curricula assume such different things about the students who are beginning Algebra. Does anyone know why that is? Is there something in the water in Massachusetts/Maryland?
Posted by Michael Pershan at 3:37 PM 10 comments:

Within the big tent that is problem-solving, there are some really different approaches to teaching. In this post I'm going to draw out one of those differences, offer an interpretation of their significance, and then invite you to disagree with me in the comments. Deal?

There are two free, complete, and well-regarded high school curricula available that I know of: the Park School's and Exeter's. (For some quick reading on these schools, click here, here, here, for Heaven's sake don't click here, and here.)

Let's start by looking at two problems, the first from Park Math, and the second from Exeter. 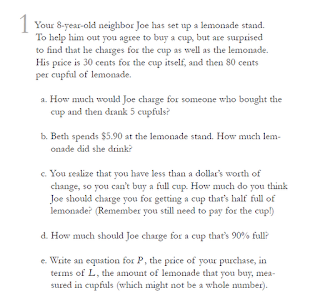 These problems look pretty similar, and I think that the generalization is fair: there isn't a great deal of difference between the types of questions that students are asked to solve in the two curricula. But these fairly similar problems are situated in entirely different contexts. In the Park Math curriculum this problem serves as a concrete hook to hang the rest of a series of linear functions problems on. In the Exeter problem set, this problem is preceded by a rates problem and followed by a problem that asks students to practice a guess-and-check technique.

This difference signifies a big difference in the pedagogical assumptions of each school. The Exeter curriculum seems premised on the idea that deep learning happens when students make connections, and solving difficult problems divorced from context forces one to make connections. Students will learn best when forced to situate a new problem among the rest of mathematics. Categorizing problems for students as they're learning them is like organizing questions by topic on an exam. The context of similar problems makes retrieval way too easy on students, and they learn less from it. At the end of the day, it's all about making connections between different mathematical topics.

Park Math, on the other hand, seems premised on different assumptions. Their curriculum is consistent with a vision of learning that values narrative above making connections. Their curriculum is designed to offer concrete hooks and guiding problems for students to dive into. Then the problems develop and complicate the introductory problems and then, after the development, students are offered an array of difficult problems that use the mathematics that was developed. They're betting that it's sufficient to allow students to make connections in this section, after the story of (say) linear functions has been told.

So, that's the framework I'm offering for the differences between Park Math and Exeter's approaches. Park Math favors narrative in learning, whereas Exeter prefers making connections.

Every problem set that I've ever made follows the Park Math format. Exeter is the weird one here for me -- I've seen very little that resembles their approach. But, for a while now, I've been a bit worried that my scaffolded problem sets are offering too much support for my students. I'm thinking that I focus too much on narrative, and not enough on helping my students make connections.

Homework, for the comments:
Posted by Michael Pershan at 3:11 PM 8 comments:

What does it take to become great at teaching? 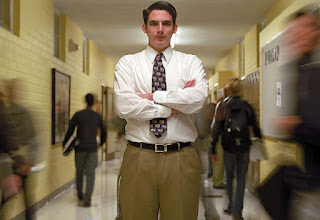 That guy looks pretty good. He's got a tie. His arms are crossed. He moves SUPER SLOWLY.

Anyway, if I polled 100 teachers about what it takes to be great, I think 75 would say "experience." Then 24 would say "reflecting on experience."


"The Mistake Most Weak Pianists Make is Playing, Not Practicing."

Study Hacks is one of my favorite blogs, written by Cal Newport, a professor of Computer Science at Georgetown. On the blog he published a letter he received from an accomplished piano player. The letter details the differences between the habits of the top piano players and those of the musicians just below the top. Here's an excerpt, with four strategies for practicing that separate the top musicians from the rest:


The best musicians figure out ways to focus on the hardest parts of their skill. They don't just practice by performing complete pieces all the time and reflecting on the performance. As important as planning for their performances are, that's not all that they do.

When teachers try to get better using the classroom they're playing, not practicing. It's good, but there needs to be something else.

In the excerpt from the piano player above he advises focusing on the hard parts of the skill and systematically focusing on weaknesses. How many teachers think like this?

Piano players get better by running scales, strengthening their fingers, training their ears, focusing on the hardest parts of pieces, and complicating tricky sections of the piece. What are some analogous drills for teachers?

This question is important and exciting to me. I am dying to know what you guys think. Here's what I've been able to come up with so far:

Are there drills that you use, or have seen used? Can you think of any drills for classroom management? Comments are open for business.
Posted by Michael Pershan at 11:27 AM 5 comments:

Call for criticism and feedback

Hey smart people. I'm teaching a course in "How not to be an awful person" next year, and I've got a draft of the course plan. I'm hoping to get some criticism and help from you all in making this better.
Self and Society - Course Plan v1.9

Here's the criticism that I've heard so far from readers:


While I'd appreciate ALL of your thoughts and criticism, feedback concerning the above are especially appreciated.

Thanks in advance, readers. I owe you one.
Posted by Michael Pershan at 1:25 PM 4 comments: