I'm not a very fun teacher, yet. My daily shtick is sets of problems that students struggle through. Some of the problems are fun and playful, but most are strictly business.

That's an issue, and I'm working on fixing it. But here's a lesson that's a step in the right direction. Here's how class went today, twice.


Take a penny, find a partner. Flip your coins at the same time. Record the number of Head/Head, Head/Tail and Tail/Tail results.

I combined all of their data onto an Excel spreadsheet and we got something like this: 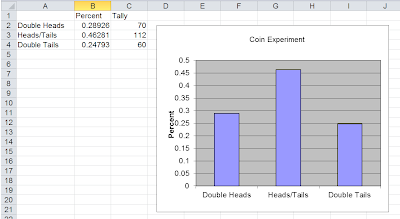 "Does it make sense that Heads/Tails beat the junk out of the other two? What would happen if we kept on going?"

The kids found the people who thought that the probability would eventually stabilize around 33/33/33 and straightened them out. Then I showed them how to make a tree, because that could be on the Regents. Then we moved to the main show.


"What are the chances that he gets $10,000 twice? Is is super unlikely? Very likely? Possible but unlikely?"


"What do you need to know for this problem?" They needed to know how many rows there are -- it's hard to see the structure of the Plinko board from the video. So I gave them this (basically ripping off this):
Plinko Handout

If I were doing this with Algebra 1, I would ask them to figure out the chances that he wins $1000 given the fact that the chip is all the way down where it is at the end of the video. But since this was Algebra 2, and I thought that would feel like a cop out to these kids, so I gave them two versions to play with. One where a couple of rows were removed, so as to avoid dealing with the walls (the calculation is a tad more complex when you have to take them into account), and the other as a replica of the board.

Kids wrote probabilities in the little circles. For some kids we took away a few rows. A bunch of kids came across a cute calculation short cut. The guys who thought they had cute little formulas ("2^13! Right?") figured out that this wasn't that kind of cute. Most of their work looked something like this: 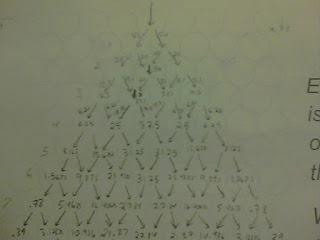 
A slight complication: most of the kids chose to tackle the simplified Plinko board rather than the actual one, which means that their probabilities would be a bit too high. So we took a second and talked about what would happen if we added a few (4) more rows, and how much that would knock down the chance of winning. Based on this calculation, along with the estimation, kids agreed that you should be winning about 20% of the time.

For me, Act Three is the data. And the data gives a nice twist. Via Bowen Kerins (this whole problem is freaking via Bowen Kerins) there's this site that collects all of the data from The Price is Right. It's great, and sorta crazy. But mostly great. Anyway, here was the important table:

Kids nailed it: people are being stupid. So, lesson of the day: If you're ever on The Price is Right, and you play Plinko, drop your pieces in the center slot!

Kids wanted to know what happened in the rest of the video. So I showed it. But first I asked them to calculate what the chances are that he could pull off the $10,000 win twice in a row. This was a good moment, because I got a lot of kids saying wrong things and I know that I need to spend a bit more time on independent events.

Posted by Michael Pershan at 8:51 PM