The Problem With Exponents Education

What is the source of all these troubles? One answer is that exponents are introduced to kids solely as repeated multiplication.

You might not find this troubling. You might say, "Hey, that's a fine mathematical definition. After all, isn't multiplication just repeated addition?"

In math we deal in abstractions, and abstractions are best understood from multiple perspectives. Sometimes it's helpful to think of multiplication as repeated addition. But is 3.4 times 5.7 really best understood as repeated addition of 5.7 some 3.4 times? Instead, you might think that there are times when area is a good model for multiplication. Other times call for scaling as our model. Arrays are often helpful. The number line is often useful.

The point is that, in multiplication, we have multiple models that help us glimpse aspects of what is essentially an abstraction. For thinking about the Distributive Property, you want the array model. But arrays are less helpful for decimal multiplication, and there you really want to be talking about area with your students. For multiplication of negative numbers, you want transformations of the number line. Different models for different moments.

We have one way of thinking about exponents, and it's not terribly effective all on its own. We need more models for exponentiation, and we need to think about replacing "repeated multiplication" as our students' first exponents model.

Start With Squaring and Cubing

You might kick that unit off with a visual pattern such as this one: 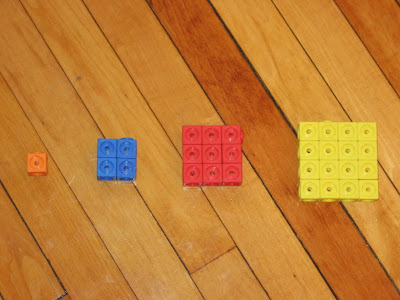 You make sure that kids can draw the next step. You ask them what the 7th picture looks like, and you ask them how many bricks are in that picture. You use these problems to give them practice with multiplication and you use the language of "squared" persistently.

Then you toss this in front of them: 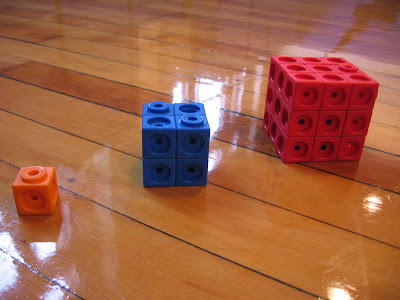 4th Graders will find these problems much more challenging. They'll have trouble drawing 3D models, and you should teach them to sketch drawings of cubes, an important Geometric skill that's often never taught to kids explicitly. And, though you start by asking them how many cubes are in the fourth picture, pretty soon you're asking them "What is 4 cubed?" 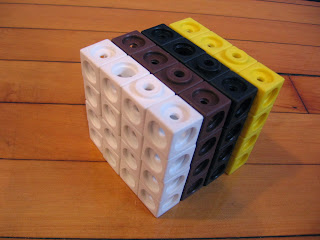 And, if your kids are anything like mine, they will absolutely not figure this out by multiplying 4 by 4 by 4. Instead they'll start trying to calculate 16 times 4.

This difference is subtle enough that you might dismiss it, but you shouldn't. 16 times 4 is an entirely different conceptual model for cubing than 4 times 4 times 4 is. You and your class should make the relationship between "Something cubed" and "That same thing squared" explicit by the end of your study.

This, and nothing else, should be kids' first exposure to exponents.

Of course the Geometric model of exponentiation will hardly suffice for kids in the long run. But it's the foundation, it's where we start. And what we're going to do for kids is extend the operation of squaring and cubing to other powers,to fourth and fifth and seventh powers. To do this, we'll need another model for exponentiation.

For extension to other powers we'll rely heavily on Geometric series, our second model of exponentiation. If we want to, we can even be fancy and explicitly connect the old model with our new one:

And, again, the spoken language that we use is pretty much the point here. We're going to start talking about the picture after the cube as the "Fourth Power of Three." More generally, we're going to talk about powers as entries in these patterns.

What's going on here is that we're moving toward a third model, which is a recursive definition of exponents, with squaring and cubing as our anchors. We'll define "3 to the fourth power" for students as multiplying "3 cubed" by 3. After all, isn't that how we moved from 3 squared to 3 cubed back in our earlier work?

Still not convinced that the recursive model is a worthwhile investment? Think ahead to how hard it is to convince kids that negative exponentiation doesn't have to produce negative results, and think about how helpful these patterns will be for that. 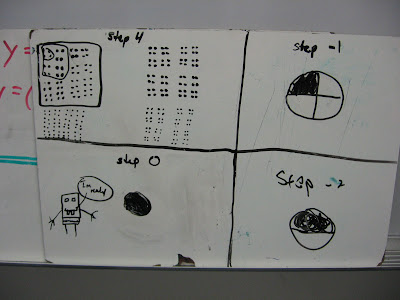 But the foundations for exponentiation need to be laid several years earlier in a child's education if we want to really help our kids avoid all those pesky, Algebra-killing errors in high school.
Posted by Michael Pershan at 4:43 PM