How do we share our lessons with other teachers?

You can share every document you make -- lessons, worksheets, activities, warm ups, exit tickets, etc. -- but this way lies ridiculousness. What percent of your work is new or interesting? Is anyone really just going to use all your worksheets? Sharing everything is sharing nothing.

Writing about lessons is a better way to share. You only put out the interesting stuff, and you get to make the case for the quality of your lesson. You can include snapshots and pictures of kiddies creating the things that you helped them create. This is good.

I wanted to try a new way of sharing a lesson, though. I took 43 minutes of classroom time, and I squished it into 2 minutes. I tried to faithfully convey what I thought the crucial bits of class were. Here's what (I think) I ended up with:
In the end, I created the sort of thing that I'd like to see others make. I hope that you do.

Afterword:
We're wrapping up the year here, and I don't know if I've got another two-minute experiment up my sleeves. The next stage of this, for me, might be in the fall.
Posted by Michael Pershan at 11:46 PM 7 comments: 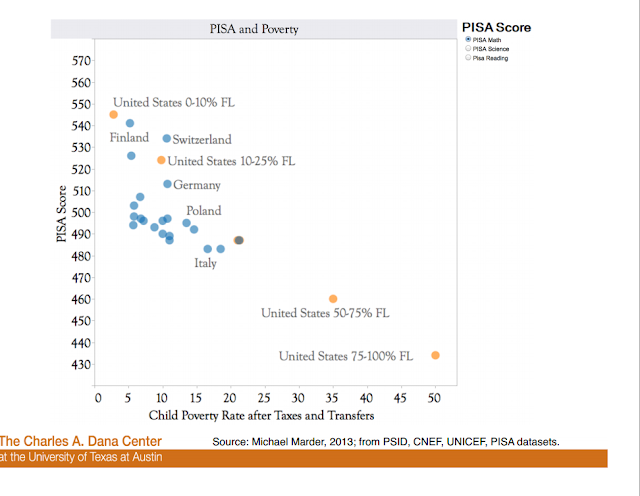 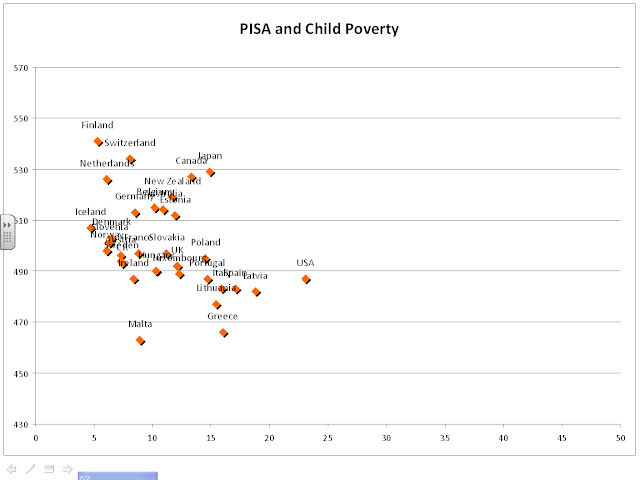 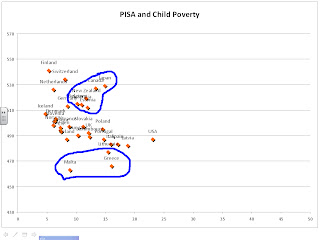 How kids think about multiplying polynomials

The kids are confident

I recently gave my students another survey. At the time of the survey, the students had just studied exponents and were about to begin multiplying/factoring polynomials. To emphasize: they've never studied multiplying polynomials in a formal setting. The second half of this survey is what you folks call a pre-assessment or something.

This response from a student -- let's call him Mike -- is especially interesting. 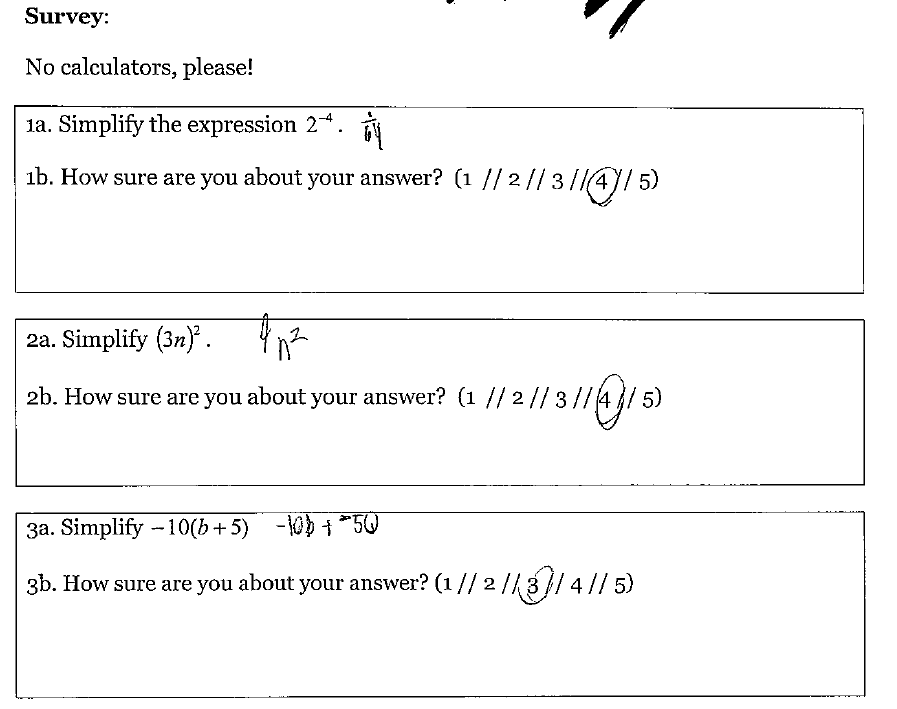 So far, we haven't taken Mike out of his comfort zone. Take a look, though, at what happens when we push him out of the boundaries of what he's studied formally (this year): 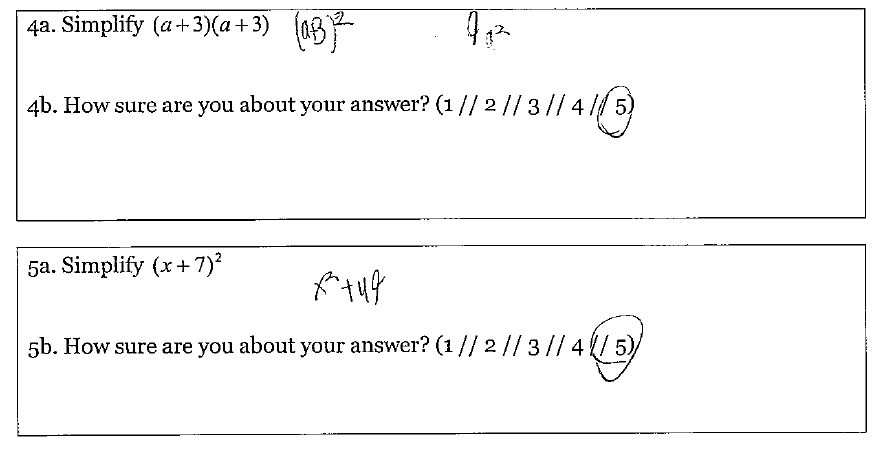 The first thing to note is Mike's confidence. He expresses more confidence in the stuff he's never studied in school than the stuff that he studied a week ago.

Two numbers, not one

Here's one take on his contrasting responses: in responding both 9a^2 and x^2 + 49 to two questions that Mike himself takes to be similar, he betrays that he doesn't see those two responses as especially different. In other words, Mike is operating on the "x" and the "7" as two independent numbers, he's doing the same thing with "a" and "3", and as a consequence there isn't that much of a difference between 9a^2 and x^2 + 49.

Debunking(?) the Distributive Property of Exponents

Let's talk, for a moment, about that x^2 + 49. It's by far the most common response to this question on the survey. It's also a very common mistake, one that we've cataloged on mathmistakes.org before -- twice, actually. Here is a sample of some of the comments that teachers left on those mistakes:

"I think the prior comments have essentially nailed it. The trouble is the “distributive property”."

"We don’t teach why multiplication distributes across addition, and we talk about a power to a power means you multiply, so it seems very hard to distinguish between this mistake and when you can distribute."

(Heck, I even named one of those posts "The Distributive Property of Exponents.")

But let's look at some of the other responses from this survey: 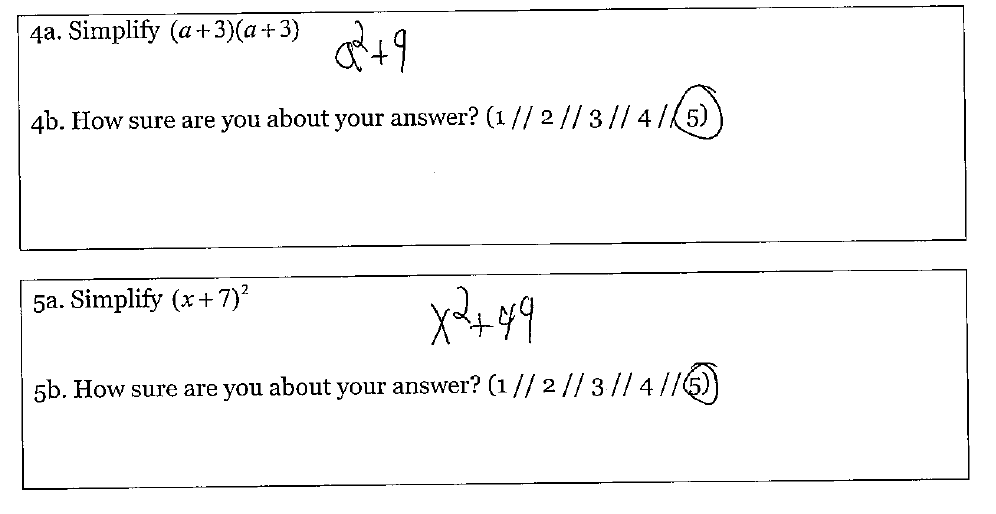 Maybe the Distributive Property explanation is helpful in some cases, but there's something else going on here.

So, what is going on here?

Let's look at one more response, before wrapping this thing up: 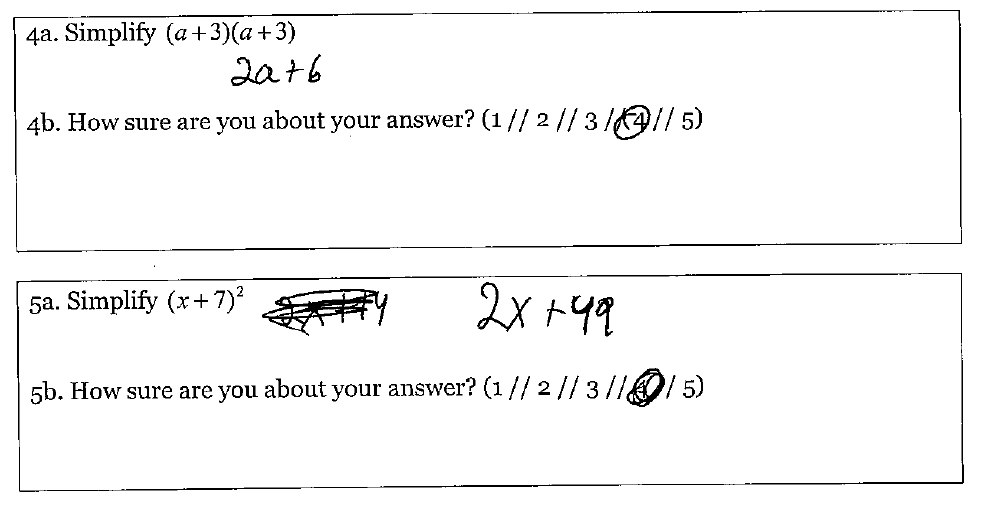 Why would this student multiply the 7's together, while adding the 3's together?

I used to think that consistent mistakes were the most interesting, but now I'm pretty sure that inconsistencies are far more revealing about what students are actually thinking. They're like tensions in a story or conflicting experiments.

I don't know how to explain these (fairly typical) responses, but here are the principles that will guide me thinking:
That's it for now. Go forth and comment -- here about the overall analysis, and over at mathmistakes.org for the last survey result from this post.
Posted by Michael Pershan at 9:42 PM 4 comments:

The kids. They have no intuitions about the exponents. Especially when we get going backwards down the number line. And they just cannot walk out of my classroom only knowing how to graph and write equations for linear stuff. 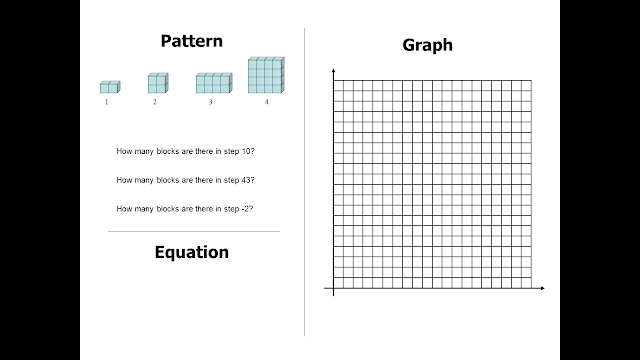 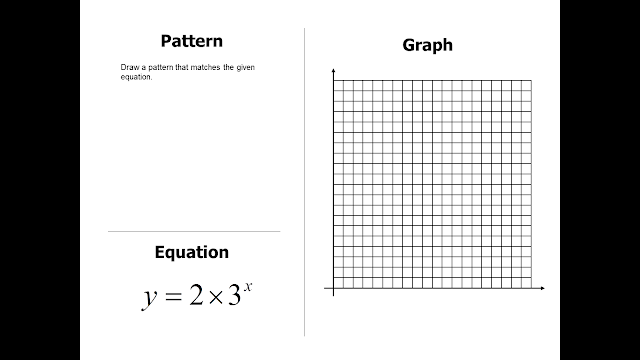 You know the drill: find the missing things.

I actually liked my second version of this activity a bit more. I gave them a bunch of patterns and equations and had them match them up on the whiteboards. 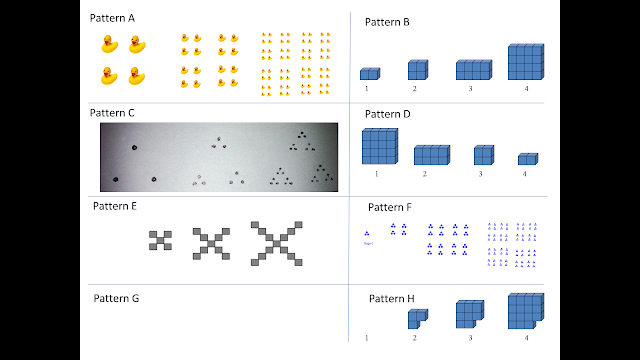 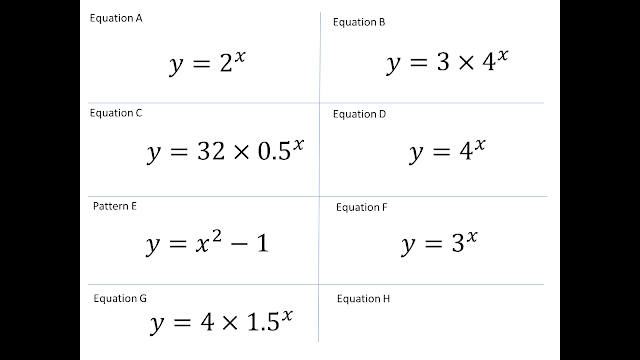 This significantly lowered the barrier to entry, and I had some good conversations with some struggling Algebraists. 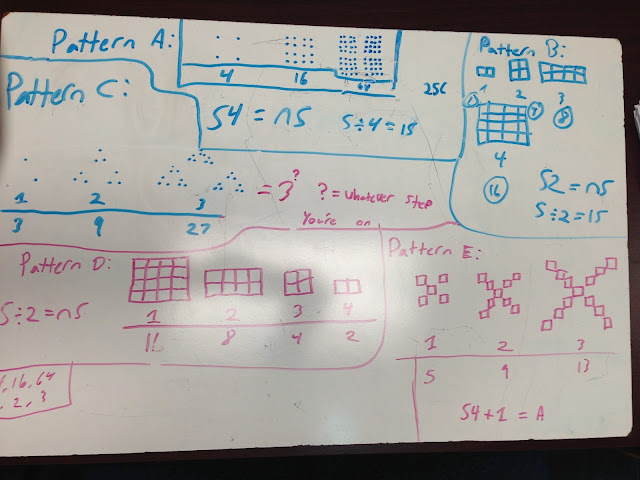 (A close eye will notice that in this second activity not all the patterns match up with equations, and not all the equations match up with the graphs. This was a good idea, because it was a nice twist, required some creativity in the pattern making, asked kids to review linear modeling, and took away some of the pigeonholing that often annoys me about matching activities.)

Here lie the files, in case you want 'em:
Extensions and spin-offs in the comments, if you please.
Posted by Michael Pershan at 7:30 PM 4 comments:

I picked the wrong exercises

In January I wrote a post lamenting the plateau that many teachers encounter after their first few years. I ended that post with a commitment to avoid that plateau with intellectually taxing exercises, and I suggested three such exercises:
I tried each of these. I started planning my lessons by anticipating the hard parts of my lessons. I joined on to (the excellent) Productive Struggle blog and posted more regularly about my failures. I got myself in a bunch of classrooms.

None of these has worked particularly well for me. The exercises didn't feel like they were helping me much, and the more I thought about them the less sense that they made.

I've thought a lot about it, and I think I misfired because I failed to understand what makes great teachers different.

"What do you mean by great teacher?"

Yeah, very fair question. Let me put a few of my assumptions on the table:

"All teachers are valuable." Yeah, I know. Yesterday was Teacher Appreciation Day, it was great. That's not what I'm talking about.

This two-pronged hypothesis is where I landed:

There's one big thing that matters to teachers, and it's having someone help them make their lessons better. Every other aspect of teaching matters less than that one. That's your core source of value as a teacher. If you want to be great, produce the sort of lessons that people will get excited about. (See how carefully I phrased that? Excitement about your work is the heuristic -- it's not the goal.)

But if you want people outside the profession to admire your work? For better or for worse, tech is the way to go. People eat that stuff up.

A better set of exercises

Being great means doing great things in the classroom, but my three exercises didn't really help me get better at creating interesting curriculum, which is what my students and peers really value. The exercises didn't work because they weren't sufficiently focused on what actually matters to my career.
That's the bad news. But, good news, everybody! Here's my updated list of exercises, and I feel a lot better about committing to these guys:
God, I hope that made sense. I feel a lot better about this than I did after my earlier post. Let's end with some quotes that seem sorta relevant but mostly I just like them.

"So much for endings. Beginnings are always more fun. True connoisseurs, however, are known to favor the stretch in between, since it's the hardest to do anything with". - Margaret Atwood, Happy Endings

"Every creator painfully experiences the chasm between his inner vision and its ultimate expression." - Isaac Bashevis Singer

As always, start some trouble in the comments.
Posted by Michael Pershan at 10:11 PM 9 comments:

Now that I think about it, I can't remember why I chose ducks.

Here's a lesson that went better than it was supposed to.

Grab a whiteboard, and grab your partner. Draw Step 4 of this pattern. Then draw Steps 0, -1 and -2. If you finish that, find a rule for Step n. You finish that, graph the rule.

Here was my favorite: 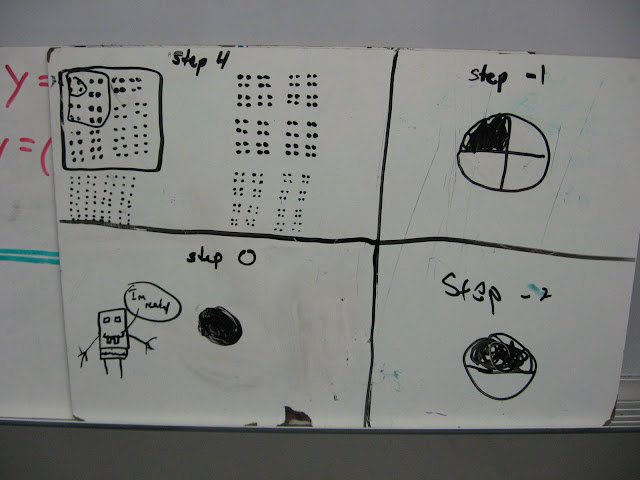 Ah, who am I kidding, they were all my favorites: 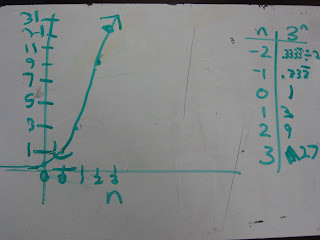 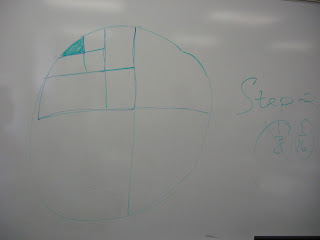 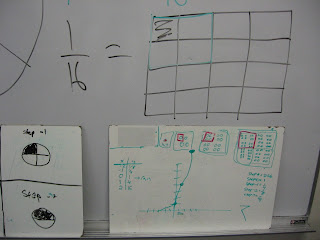 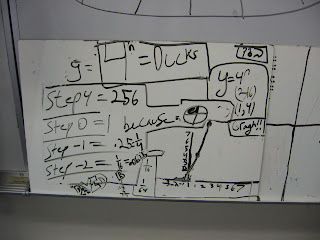 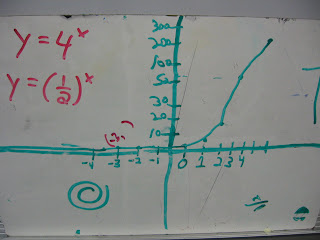 Credit:
Thanks for making my "just OK" days a bit better, guys.

Speaking of which: any ideas for improvements, people? Drop a note in the comments with ideas.
Posted by Michael Pershan at 11:01 PM 4 comments: